That Indian consumers love freebies is no surprise; and scamsters are out to make the best of this weakness. The Indian telecom sector is going through an upheaval after incumbent player, Reliance Jio, signed users offering free data of upto 1GB per day at 2mbps speed and free unlimited voice over LTE calls up till March 31, 2017. This has led to a price war in the country forcing major players like Airtel and Vodafone to drop prices. Of course the consumers are having a field. But it’s just not the consumers, but phishers too who are having a blast. First, it was a seemingly message from Reliance Jio offering to upgrade the 1GB limit to 10GB. 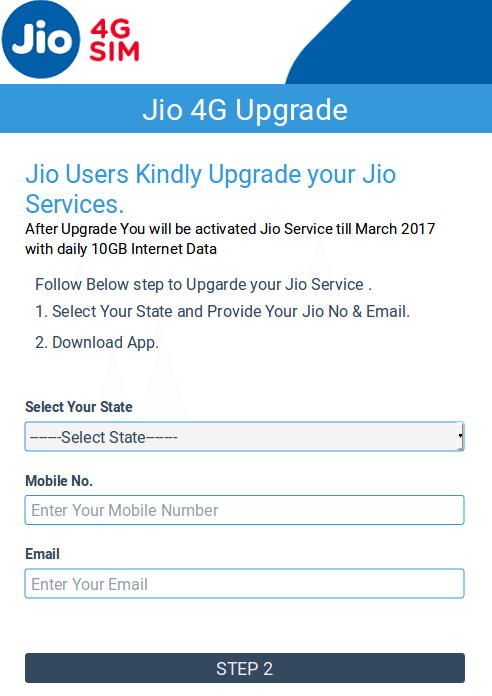 The upgrade link page, — upgrade-jio4g.ml — asks users for details like phone number, email address and more. After the user has shared all the details, it asks them to: “Share this with your WhatsApp Groups so they can also Upgarde Jio Service” or “You need to share at least to 10 Whatsapp groups or friends to Upgarde Jio Service”. Now a similar message has surfaced. This time from Airtel. From a scammer posing as Airtel to be precise. It offers a free 3G/4G internet pack for three months. Very much like the Jio-message, this page at — airtel-3g.4g-internet-free.in — asks users to submit their name, mobile number and state. After the details have been furnished, it asks them to share the message in at least 8 Whatsapp groups or friends. The share button on the mobile opens up the Whatsapp app.