Ecommerce giant, Amazon, has launched a new service called Amazon Cash, which will allow users to add money to their Amazon Balance at participating convenience, grocery, and drug stores by purchasing and automatically claiming an Amazon.com Gift Card to their account. To use the service, consumers can visit participating stores, show the cashier a barcode to scan, and then pay the amount that one would want to add to the Amazon Balance. Available currently in the US, the company claims that the service has no fees and the Amazon Balance can be used to shop for eligible physical products and digital content. 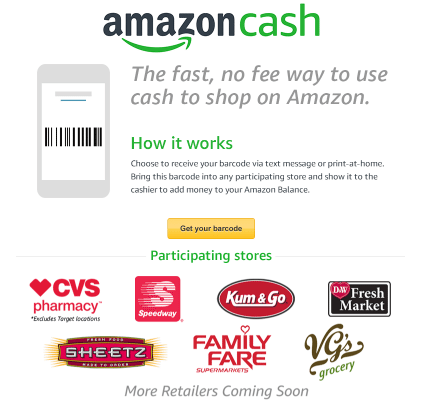 The ecommerce states to have partnered with with thousands of stores across the country, including CVS Pharmacy, Speedway, Sheetz, Kum & Go, D&W Fresh Market, Family Fare Supermarkets, and VG’s Grocery, and is planning to tie-up with more retailers in the near future. Currently the service allows a user to add between $15 to $500 in a single Amazon Cash transaction, and according to the company, has a daily cap which varies from retailer to retailer. The company states that there is only one barcode per account and this linked barcode can be used every time to use Amazon Cash. The barcode that is generated can also be saved to the user’s digital wallet (for iOS users) and added as a shortcut to the home screen (for Android users). Interestingly, smartphone is not a necessity for using Amazon Cash, the company explains that users can use a print out of the barcode which can be used in the store for scanning.