Business intelligence and analyst firm, App Annie, forecasts consumer spend on apps to reach $139 billion in revenue in 2021 as maturing markets see strong growth in gross app store spend per device and increases in in-app subscriptions. According to its 1026-2021 Market Forecast report, the five largest mature markets, which include the U.S., China, Japan, South Korea, and the United Kingdom, are expected to account for 85% of global consumer spend in 2021. Emerging markets, particularly India, Mexico, Brazil and Indonesia, are projected to fuel downloads in mobile app stores. Global downloads across all mobile app stores are forecast to increase 19% annually, reaching 352 billion in 2021. “Apps are transforming the way consumers interact with products, services, content and brands, across verticals globally. Apps are creating an intimate, highly personalized environment for brands to engage with users,” said Danielle Levitas, Senior Vice President, Research, App Annie.

“Consumers are already spending twice as much time in apps than they did two years ago, which means it is increasingly critical for companies to build a successful business on apps if they haven’t already.”

The report claims that APAC will remain the largest region by both downloads and revenue through 2021, with China leading the charge. With revenue per device of nearly $105, Japan will remain one of the most lucrative markets while India’s growth boost downloads. It also states that emerging markets are expected to see a boom in downloads as nearly 3 billion more consumers are introduced to apps over the next 5 years. For mature markets, users are increasingly engaging with, and spending on, apps. The APAC region is projected to remain a global leader in the app space, leading by both downloads and revenue.

The report states that Google Play and third-party Android stores are forecast to see downloads grow at an annualized rate of 23% to 299.9 billion by 2021, thanks to growing smartphone and app adoption in emerging markets, particularly India, Mexico, Brazil and Indonesia. iOS will remain the most lucrative app store through 2021, generating $60.3 billion, thanks to growing revenue per device from Apple’s comparatively affluent customer base. However, the combination of Google Play and third-party Android is forecast to exceed iOS in 2017 as the sharp growth in installed base of Android devices makes up for lower user purchasing power.

App Annie states that the app store downloads are evenly distributed across countries as compared to revenue. Last year, the top five countries represented 54% of worldwide downloads and this will remain roughly static through 2021 as growth in China and India balances out growth outside the top five. 75% of the global revenue pie was represented by the top five countries, that is expected to increase to 85% by 2021. This, according to the report, is due to the increased spends on games and subscriptions from existing smartphone users in mature markets, primarily urban China, but also the United States, Japan and South Korea.

The report states that in 2016, games represented 11% of time spent in Android apps and 39% of all app downloads, yet generated 81% of consumer spend via stores. App Annie claims that many non-game apps monetize through advertising or commerce, as revenue through these channels is even greater. However, in-app subscription revenue from apps related to media streaming, news and dating is routed through the app store revenue channel that is poised to grow at an annualized rate of 25% which will outgrow in-app purchase revenue from games and reach $33.8 billion by 2021.

All about India and China

The report forecasts that the majority of Chinese app users should settle into a habitual usage pattern by 2021, resulting in sustained revenue growth even as downloads slow. Despite some maturation occurring in India through the forecast period, it is projected to remain in early stages of this cycle, with sharp download growth and revenue expanding from a low base. In China, the company expects app store downloads to grow at an annualized rate of 19% while consumer spend grows at 24% from 2016–2021. Though smartphone adoption is reaching saturation in Tier 1 Chinese cities, much of China is still underpenetrated. Apart from increasing smartphone adoption leading to growth in app downloads, China has a couple of unique advantages such as purchasing power which is higher than other emerging markets, cultural resemblance to other mature East Asian markets. These factors is forecast to lead the country in per device app store spend, driving overall revenue growth.

On the other hand, the report states that India is poised for growth in smartphone ownership over the next five years. The forecast states that app store downloads will grow at an annual rate of 28% to 22.7 billion by 2021. It claims that since India is recently adopting smartphones, India is not yet driving the material app store revenue. Hence, app store spend are forecast to grow at a rate of 75% annually to $2.1 billion in 2021, but its share of global spend is expected to remain under 2%. App Annie states that purchasing power in India is significantly lower than mature markets and this is compounded by the fact that cultural norms favor saving over discretionary spend on gaming and entertainment.

The report also states that in 2017, mobile game downloads in India are forecast to grow by 111%, while generating less than 1% of global consumer spend. App Annie forecast shows that India has strong potential, but game developers will need to consider alternative monetization models, like advertising, to thrive in this market. Similarly, strong purchasing power and cultural factors will help China account for a staggering 41% of mobile app store consumer spend by 2021. According to App Annie, app publishers looking to enter China, particularly in gaming and entertainment, should focus on localization and partnerships to bridge deep-rooted cultural differences with the West. 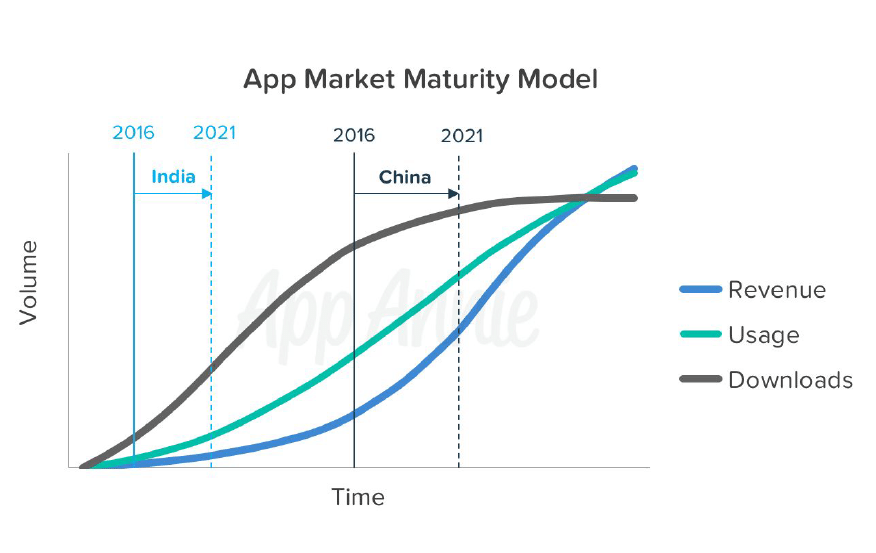