The CRM software market grew by 12.3% in 2015, taking the market to be worth $26.3 billion, up from $23.4 billion in 2014, as according to Gartner. The growth was led by Salesforce, which increased its market share from 18.2% in 2014 to 19.7% in 2015, commanding a revenue of $5170.9 million in the year. The company also leads in revenue in the ‘sales’ and ‘customer service and support’ (CSS) segments of CRM, and it is now third in revenue in the ‘marketing’ segment, where it is the fastest-growing segment among the top five. The top five vendors had very little change in ranking compared with 2014, although Adobe jumped into the fifth position, displacing IBM, as it continues to lead the CRM marketing segment with a focus on marketing agencies and the chief marketing officer (CMO). 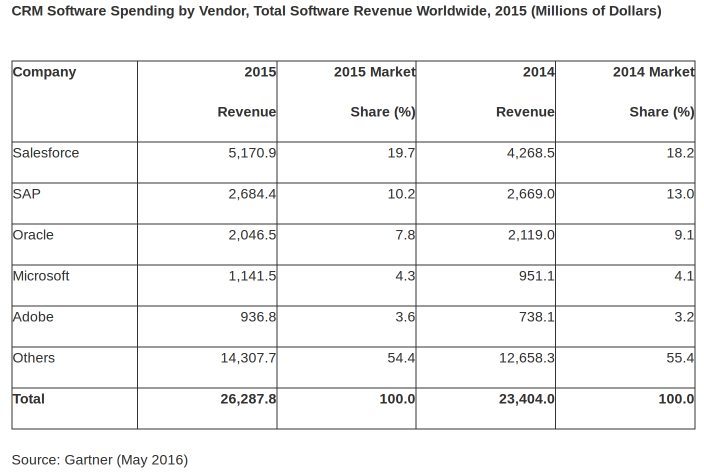 M&As fuel competition at the top

According to Julian Poulter, Research Director, Gartner, the merger and acquisition activity that began flowing through the market in 2009 continued in 2015, with more than 30 notable acquisitions.

“This has resulted in increased competition at the top end of the CRM market, with the continued focus of global vendors’ sales forces driving good growth worldwide in all CRM subsegments but only for cloud or software as a service (SaaS) applications.”

Brajesh Sachan, CTO of Deskera, a Singapore headquartered, enterprise software company, feels that new age CRM is not something you have to go and access from your office table only. “It doesn’t come in your way any more. New age CRM is natural part of your workflow whether you are a field executive or an inside sales executive or drive sales through social media,” he said. He feels that mobile has played a big role in this transition and CRMs will have to adopt a mobile first strategy. “Natural integration of CRM in workflow of on-field sales staff is what will push startups into new plugins for major CRMs like Salesforce, SAP and Deskera. And there will be obvious acquisitions of these services,” Sachan added. CRM growth is being driven by cloud service revenue, which, in the application space, uses SaaS as the major delivery model. “SaaS revenue grew 27 percent year over year, which is more than double overall CRM market growth in 2015. On-premises new license revenue declined 1 percent for the same period,” Poulter added.

Spending in North America, according to Gartner, continued in double digits as this market continued to generate the bulk of revenue (55.7%) in the overall CRM market. However, US dollar figures were significantly impacted by currency swings in 2015, especially for those vendors with significant revenue from non-North American markets. Currency impacts typically show that overall EMEA results were down for companies with substantial EMEA revenue when reported in U.S. dollars. Companies that report in Euros, such as SAP, show lower CRM growth at 0.6 percent in current U.S. dollars, but in constant currency, they show 12.8 percent growth.

The report also stated that emerging Asia/Pacific grew the fastest, with growth of 21.9 percent in 2015, closely followed by greater China with 18.4 percent growth. Middle East and North Africa and mature Asia/Pacific both achieved double-digit growth at 10.7 and 10.2 percent, respectively.

How LinkedIn-Microsoft deal can shakeup the enterprise 'Dynamics'