The top 10 food delivery startups around the globe together are valued at $18.1 billion according to a Zirra report. Zirra, a startup itself which has developed AI and machine learning technology to analyze the private tech market, states that investors are hungry for companies around the delivery space and on-demand companies, especially online food delivery services, are still considered by many venture capitalists as trendy, bubbly, and an ambitious investment. Zirra states that last August, UK based food delivery startup, Deliveroo, rasied $275 million in equity funding, and in February 2017, Instacart completed a round of investment with $400 million. The AI analytics startup states that many companies in the space are experiencing heavy losses and are struggling hard to grow, a possible consequence of the low barrier of entry. However, marketing and advertising activities of food delivery startups has seen an increase as smaller players are seeking a buyer, sometimes at any price. But, slowly and surely, some companies are surpassing the clutter with out-of-the-box ideas, quick technology adoption, supply chain management, marketing and food quality.

According to the report Ele.me rasied $1.25 billion in 2016 and is the top delivery startup in the list. Its paying user base is steadily increasing and the company is also expanding its product offering. Zirra values the startup at $5.4 billion and states that since established players are already dominating the market Ele.me will have to display a strong USP to surpass the clutter. 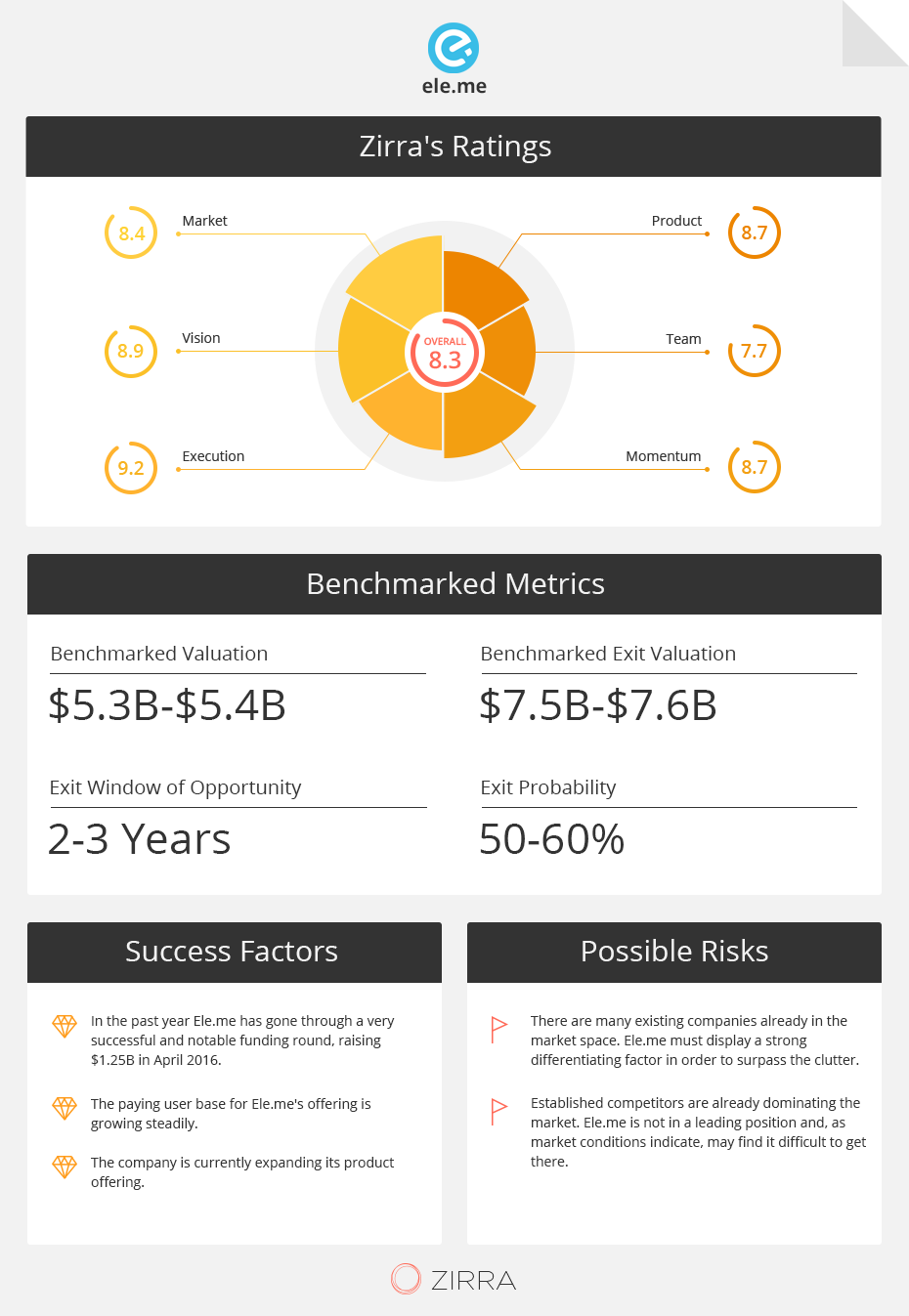 Number two on the list is Instacart with $3.3 billion valuation and a 50% exit probability. Zirra states that the startup has been able to secure a niche that it can contain and protect as well as has a significant cash repository that it can use for expansion and growth. The flipside is that the startup has been increasing the price of its products and services which may result in the loss of customers. 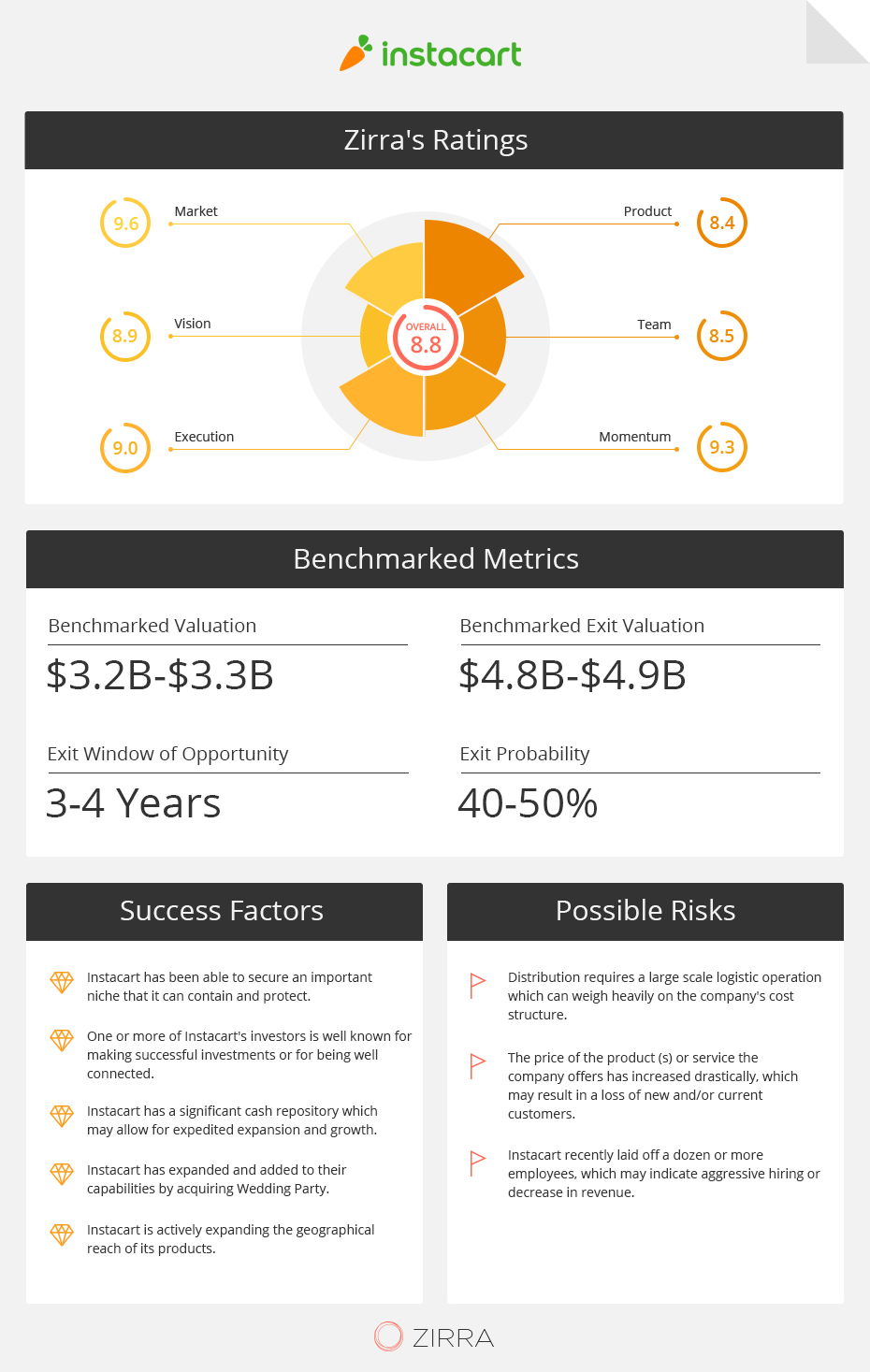 Delivery Hero stands number three on Zirra’s top 10 delivery startup list with a $2.9 billion valuation. With an exit valuation of $4.7 billion, Zirra claims that Delivery Hero has expanded and added to its capabilities by acquiring a number of companies which will help it expand to new markets. However, the company’s social activity does not garner enough likes, shares, comments, reviews or hashtags. 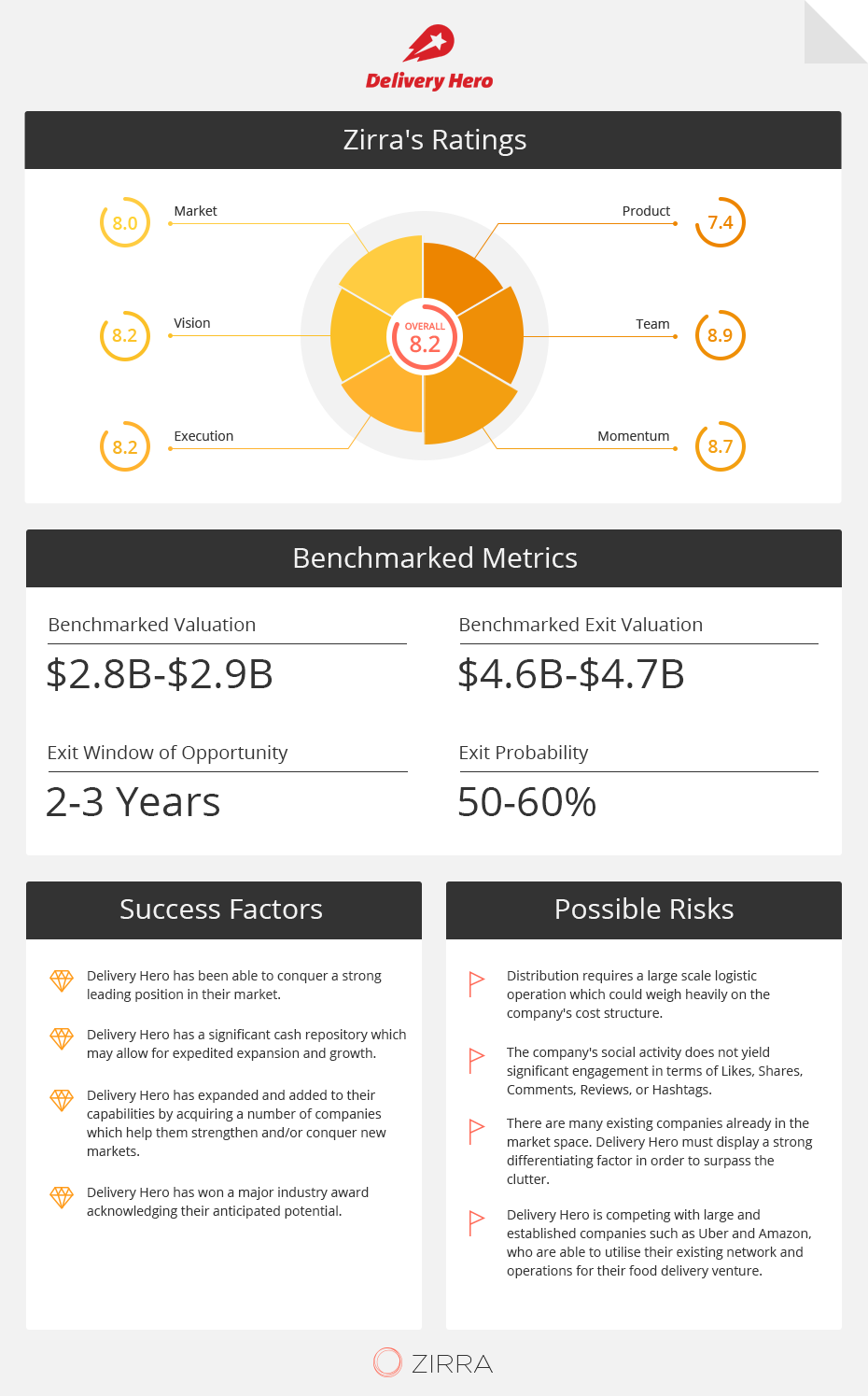 Deliveroo is number four on the list, and according to Zirra is in the hiring round which indicates further growth and expansion. The company has also seen a rise in employees and growth abroad, which add to its success factors. Valued at $1.3 billion, the possible risk that Deliveroo faces is that it is significantly reliant on theird party sites or services. 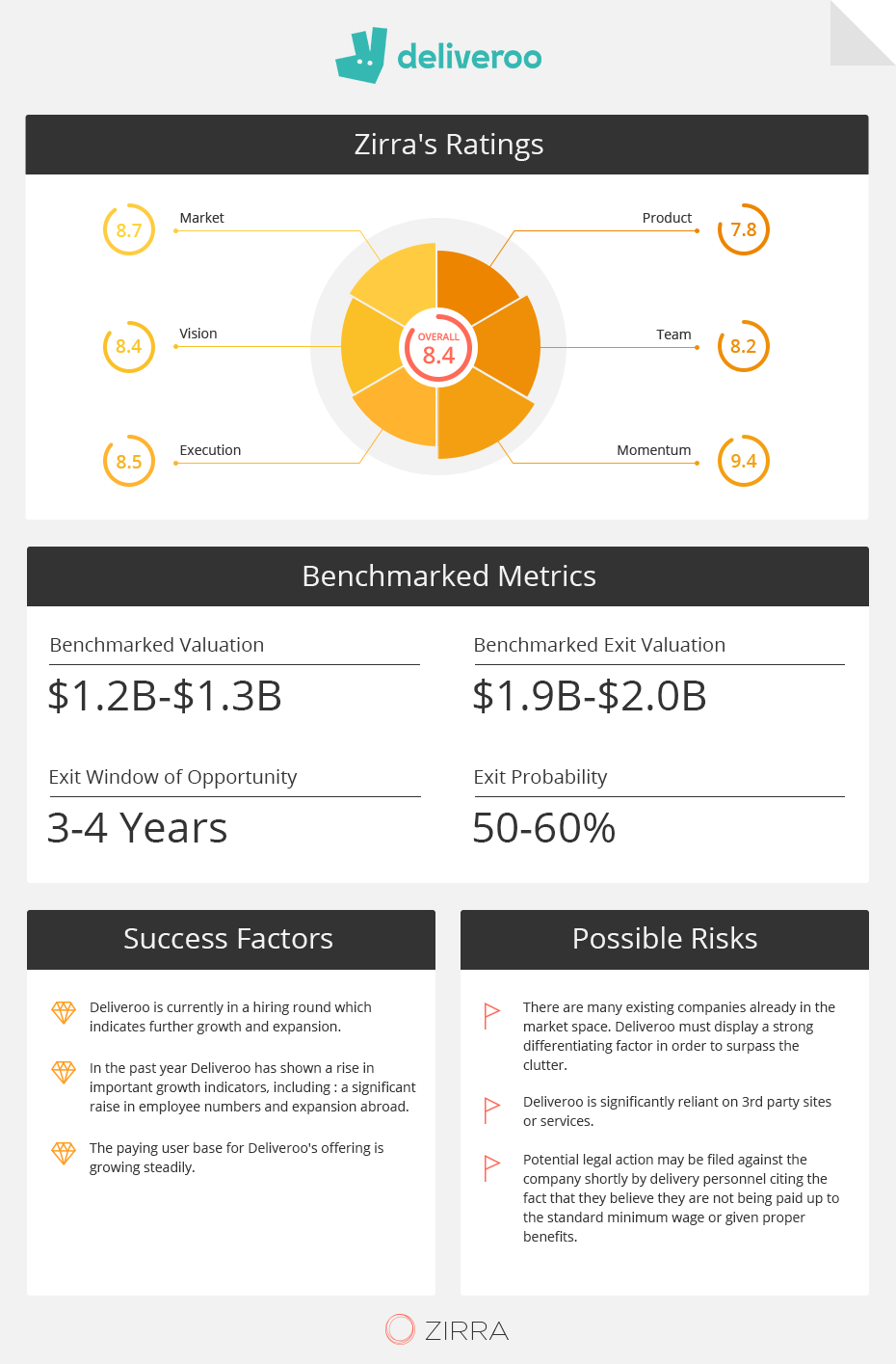 Zirra lists Dada as number five with a $1.3 billion valuation, Hello Fresh at $1.2 billion, Postmates at $1 billon, Blue Apron at $800 million, DoorDash at $600 million and Plated at $450 million. The AI analytics startup states that the US food delivery market is currently $1.4 trillion a year and only 1.4% of it is addressed by mobile by these startups. Other companies such as GrubHub, Just Eat, Yelp, as well as Amazon and Uber, who are now trying their hand at grocery and meal delivery will soon try to cash in on the untapped opportunity. 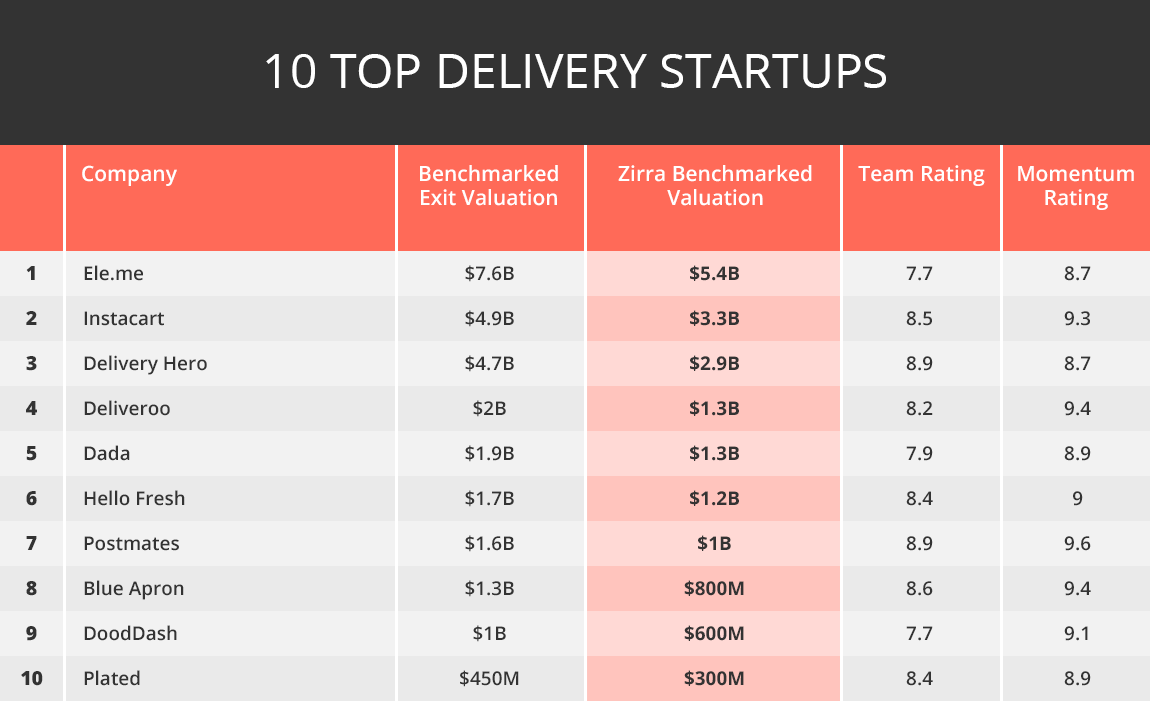