As soon as the news about the introduction of the H-1B visa reform Bill in the US House of Representatives came out, the Indian tech stocks went into a tizzy.

According to a report by Mint, Infosys stocks fell 4.5%,Tata Consultancy Services fell 5.5%, Tech Mahindra fell 9.7%, HCL Technologies saw a 6.3% drop, and Wipro 4.1%. Mphasis, NIIT, Geometric, Mindtree and KPIT Technologies as well as stocks of mid-cap IT companies also dropped to almost 4%. Another report on News18 mentioned that almost INR 44,000 crore ($6.4 billion approx) were wiped out from the market due to the stocks tanking.

The legislation called the ‘High-Skilled Integrity and Fairness Act of 2017‘ and introduced by California Congressman Zoe Lofgren, calls for doubling the minimum salary of H-1B visa holders to $130,000, which is more than double the current amount of $60,000, established in 1989. This will pose as a challenge for tech firms to induct workers from abroad. It will also cancel the lowest-pay categories and raise the salary at which H-1B employer is exempt from non-displacement and recruitment attestation requirements. With regard to startups, the Bill would set aside 20% of the allocated H-1B visas each year for startups and firms that have 50 or less than 50 employees. It would also establish wage requirements for L-1 workers and improve H-1B wage requirements to encourage companies to hire qualified American workers and prevent them from using foreign workers as a source of cheap labor. If the Bill does go into effect, IT firms in the country that are running their business model on managed services will be hit badly as India will not be an economically viable country for recruitment and off-shore employment. There will be lesser visas for Indians and IT engineers or advance degree holders in the technology segment going to or being sent to the US will become a very costly affair.

Indian companies like TCS, Infosys and Wipro have large numbers of H-1B workers in the United States are required to declare that they will not displace American workers. But the companies, according to an old report on NY Times, are exempt from that requirement if the H-1B workers are paid at least $60,000 a year. “H-1B workers at outsourcing firms often receive wages at or slightly above $60,000, below what skilled American technology professionals tend to earn, so those firms can offer services to American companies at a lower cost, undercutting American workers,” the report states. Around 85,000 H-1B visas are allotted a year, of which nearly two-thirds of H-1B visa applicants are Indian nationals who either work for the aforementioned Indian firms in the US, or the local operations of US firms such as Accenture, IBM and Google. The reforms Bill could leave hundred thousands of Indians jobless and the Indian companies in the US scampering for talent at a higher cost.

“Immigration restrictions are the main source of India’s vulnerability,” said Sonal Varma, Chief India Economist at Nomura, was quoted as saying by CNBC. “The viability of the offshoring model of Indian software firms would be at risk,” she said. According to MyVisaJobs.com, Infosys is the largest sponsor of H-1B visas in the US. In 2016, Infosys filed 25,405 Labor Condition Applications(LCA) for H-1B Visa in fiscal year 2016 (see table below). The average salary of those job offers was $81,705. Other prominent Indian companies on the list include Tata Consultancy Services (at No 3, with 13,134 LCAs at job offers worth $76,099; Wipro at No 4 with 10,607 LCAs and job offer worth $72,720; and Tech Mahindra at No 7 with 8,615 LCAs and job offer at $75,879. 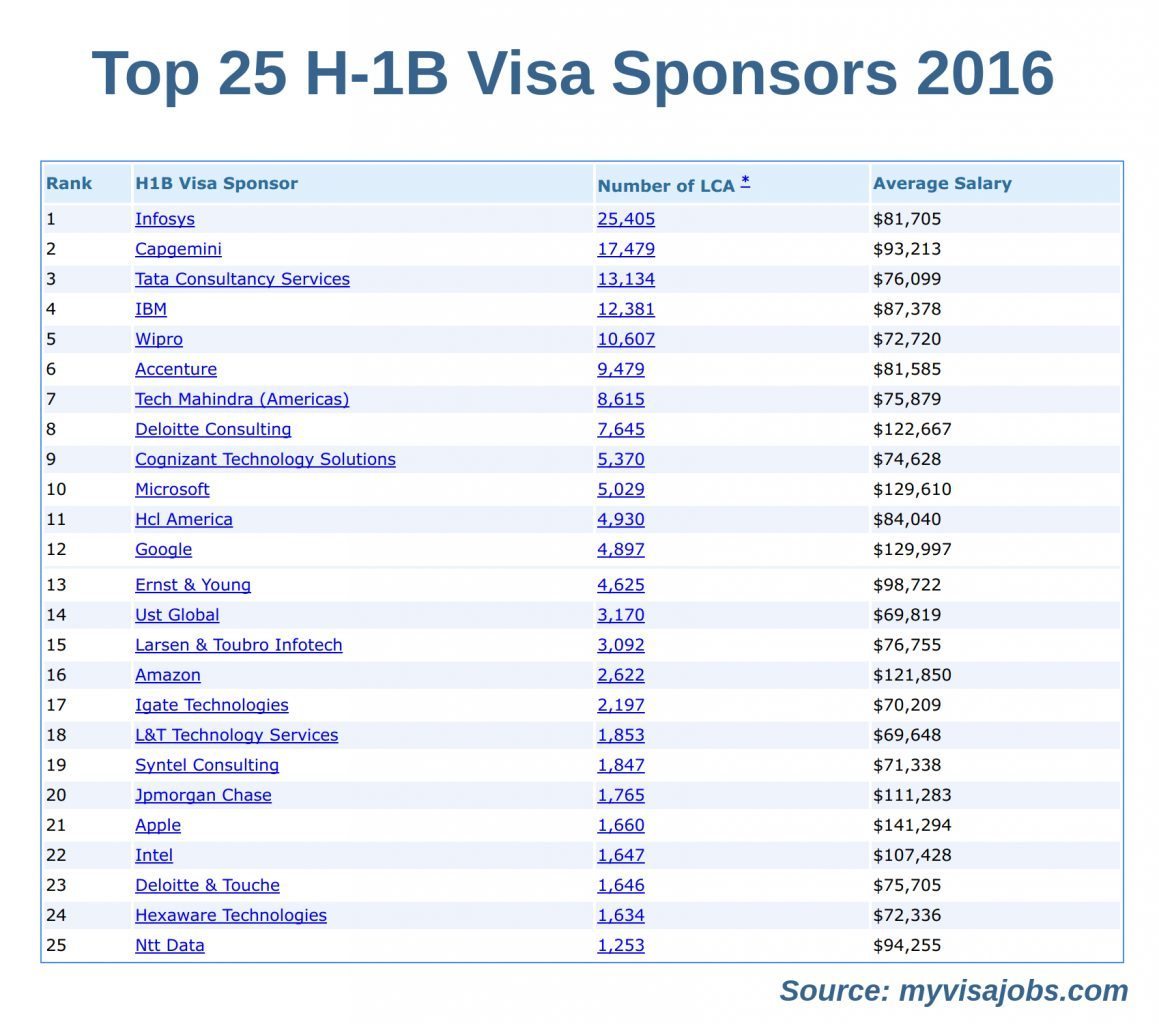 Protectionism will impact other industries too

Varma of Nomura points out to CNBC that besides of course putting a curb on hiring Indian nationals, the new policies could also affect remittances from the US. She cites World Bank data records that put US as the second largest source of remittance — worth $10.96 billion — to India in 2015. For the record, the largest remittances to India come from Saudi Arabia. The ripple affect of “increased trade protectionism,” according to Nomura could also impact Indian exports to the US, including pharmaceuticals, textiles, gems and jewelry and auto products. While it is too early to say if the reforms Bill will be passed in its entirety, or with amendments, the scenario doesn’t augur well for the Indian IT sector, which will have impact on other companies too. As for the US, Indian workers on H-1B visa not only fuel the US labor demand but also contribute indirectly to other industries — real estate, Banking, hospitality — in the country. The industries too are going to feel the impact.