While much has been written about the difficulties faced by women entrepreneurs, the Startup Outlook Report by InnoVen Capital, a venture lending platform providing debt capital to high growth ventures, has presented a different but progressive scenario of the Indian startup ecosystem. According to the report, 42% of all respondents had women in leadership positions at their startups, up from 33% last year. 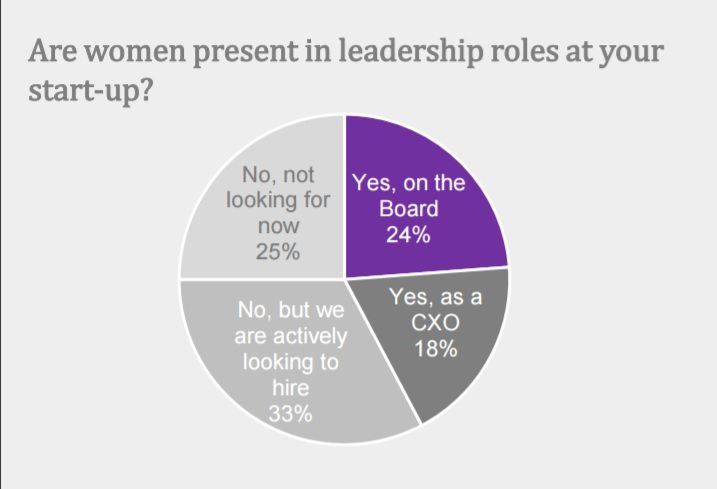 The survey captured responses from over 170 startup leaders across bootstrapped as well as funded ventures, with a view to draw their perspectives on varied subjects like fundraising issues, profitability, exit expectations, amongst others.

Where do Indian women work?

According to the World Bank (2014), only 27% of India’s workforce are females, far below the world average of 50%. Tanzania, on the other hand, has the highest percentage of women in its workforce, at 88%, while Syria has the lowest, at 14%. As per a 2010 report by National Sample Survey Organization, India’s official body responsible for conducting socio-economic surveys, India had an estimated 112 million female workers. This figure gives us the proportion of women who are doing a job for at least 30 of the 365 days being asked about in the survey. However, the 68th Round of National Sample Survey further showed that of the total private sector employment in the country in 2010, about 60 lakh women accounted for 24.5 per cent of the total workforce. Although the number is higher than the public sector (17.9 per cent), it is evident that the private sector still remains to be male-dominated. In 2015, the International Finance Corporation, a World Bank group, estimated that the GDP of India could increase by about 25 percent if both genders were fully engaged in the workforce.

Search for ‘Women in Indian startups’ on your browser and the long chain of articles would be suggestive of the fact that women entrepreneurs have laid a successful trajectory by breaking away from the traditional notions of ‘gender bias’ in the country. Last year, NASSCOM stated that in the nascent yet large startup ecosystem in India, only nine percent of startup founders are women. But according to Forbes, women overall comprise about 30 percent of corporate senior management positions, which is notably higher than the global average of 24 percent. In fact, Techseen had organized an event a few months back to understand if women from startups face any particular set of challenges while driving business goals. The speakers, who were all women holding leadership positions, were of the opinion that a woman entrepreneur faces exactly the same challenges as any male entrepreneur. Most women are not confronted by the obvious forms of discrimination or sexism. So the assumption that a female has to go through a higher number of roadblocks while setting up her business is a hoax. The fact that startups are now openly welcoming women leaders clearly demonstrates that the nation is operating through the will to perform and achieve by recognizing the right potential, driving past deep-rooted gender perceptions. As Sheryl Sandberg, COO, Facebook, who bagged the 7th place in Forbes’ ‘100 Most Powerful Women’ rightly said: