Global financial institution, ING, has published its International Survey that suggests that the BFSI sector may face challenges in getting consumers to trust artificial intelligence to handle their money. The report named ‘Mobile Banking – The Next Generation’ has taken 15 countries into consideration surveying more than 14,500 people across Europe, US and Australia. According to the report, 57% of smartphone owners in Europe have done their banking on this device at least once, and nearly 49% of Europe’s tablet owners have used them for banking. Amongst this population, 54% cite the reason for mobile banking as ‘convenience’ but the rest 56% said that they did not trust the security. 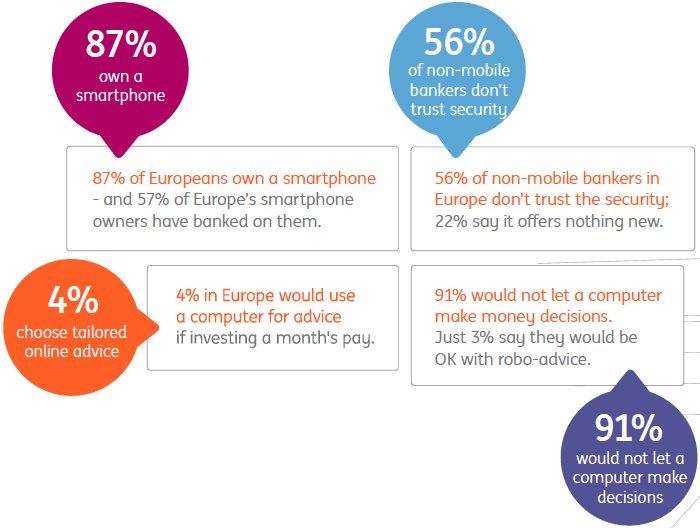 The survey asked people what they were comfortable letting a computer program do automatically for them. About 91% of the respondents indicated that they wished to retain control of their finances themselves, and would not let a computer make money decisions – even if they favor the advantages of automated services, such as online access to robo-advice. Only 3% states that they are comfortable with robo-advice. “People’s views on this new technology can be explained by a reluctance to give up control. People have a lot of faith in their own ability to make the best decisions. At the same time, we know from research that computer programmes can outperform humans, so technologies like robo-advice have the potential to be very advantageous for consumers,” said Nathalie Spencer, Behavioural Scientist at ING Group Research. Spencer feels that as people learn more about this tech, they will likely be drawn to the convenience and personalization that is offered, although the survey states that people will still want to feel they have the final say on investment decisions.

“It’s up to us now to understand better how we can address that need for control so that people can take advantage of robo-advice’s potential to improve their financial positions.”

What can bots do for you?

The survey asked people if they were comfortable with the idea of computerized services automatically doing certain everyday activities and got mixed responses. Only 12% people in Europe were comfortable with allowing a computer to automatically transfer six months’ pay into investments. 20% said that they’d be happy to let a computer apply for new health insurance for them. And 30% are okay with automating savings transfers (to avoid an overdraft) or having computer program order milk from a shop (before they have run out). 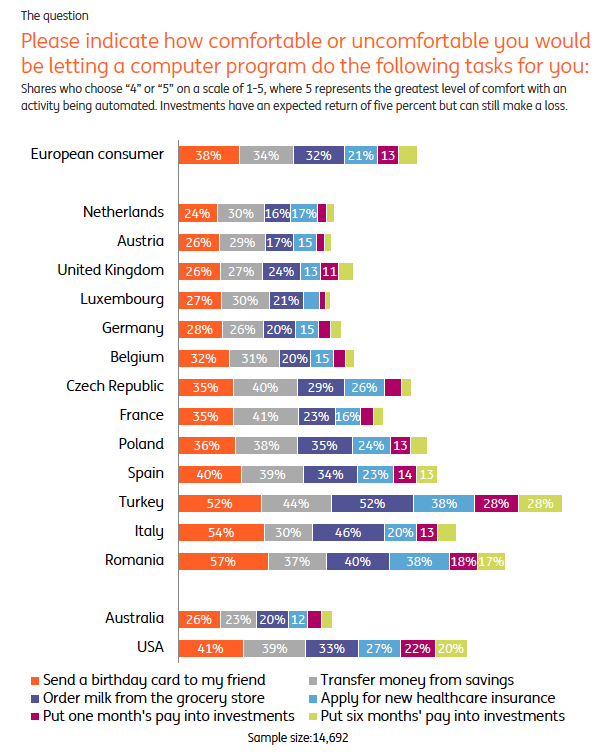 Money in you own hand

According to the survey, 36% in Europe do not want any automated financial activities and about 51% say this Luxembourg, Austria and France. Only 7% in the US and about 3% across Europe and Australia say they would like a computer to conduct financial activities automated for them without their approval. When it comes to robo-advice, 38% people in the Czech Republic and 37% people in the Netherlands are relatively receptive to accepting advice from a computer program as long as they themselves still make the decision. 40% Turks and 38% Romanians suggest they would let a robo-adviser to make financial decisions for them, if these decisions still need final approval from them. The average across Europe is just 26%. 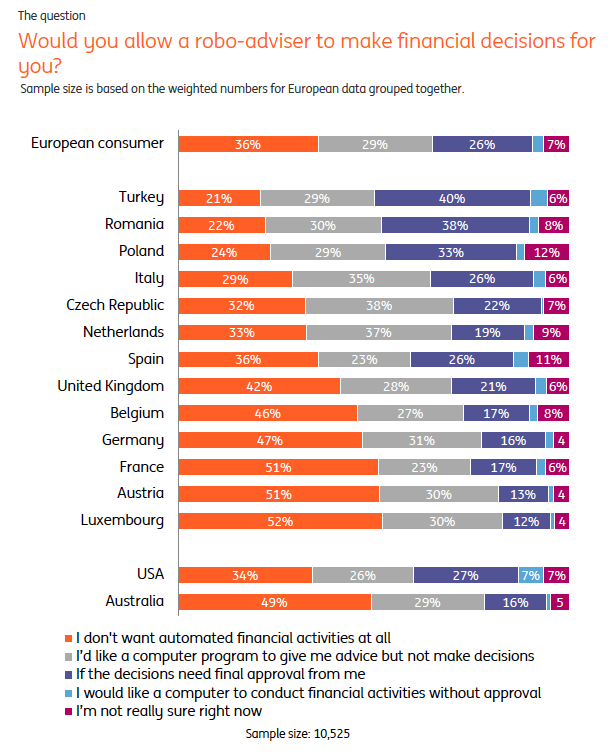 The survey found that a majority of countries prefer receiving advice from a real, professionally trained human being such as a financial or bank adviser. About 51% of people from Luxembourg and Austria say they would go for the personal touch. According to the report the European consumer average is 15%. People in the UK are more likely to prefer advice from the internet or specialist websites than are residents of other countries. 11% Europeans have not yet decided on whether to invest or not and the channel to use for investment. The survey also found that Americans, Turks, Australians and Romanians are more likely than the European average to favor “friends or family” as sources of advice. Looking at demographics, 20% men and 12% women say that they would prefer advice from a specialist website or the internet. 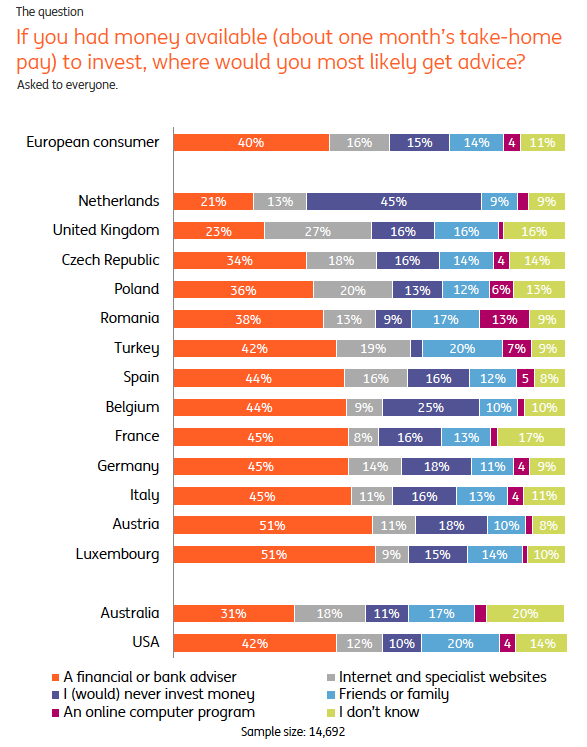 It’s all about getting used to

According to Martin Krebs, Global Head of Retail Investment Product Solutions, ING who is coordinating the roll-out of robo-advice within ING, is confident that as consumers become more familiar with automated investment advice, they will see its advantages and embrace it. “It takes a little while for people to get comfortable with new technical possibilities. Twenty-five years ago it was hard to imagine that one day people would entrust billions in savings to online banks. Now that’s a daily reality. ING now focuses on rolling out robo-advice to customers who already have some familiarity with investing, says Krebs.

“That group understands the advantage automation has to help them easily diversify their portfolios compared to the time-consuming process until now of handpicking investments. For people looking for an alternative to saving, robo-advice provides a level of service that until now that was only available to customers with large investment portfolios. It tailors and manages investments to meet individual needs and risk appetites. That makes it easier to achieve a particular investment goal.”

The survey was conducted by Ipsos on behalf of ING between 7 February and 27 February 2017. About 1,000 people were surveyed from each of Austria, Belgium, Czech Republic, France, Germany, Italy, Luxembourg, Netherlands, Poland, Romania, Spain, Turkey, United Kingdom, USA, and Australia amounting to 14,692 respondents.