A new global study released by customer engagement and operational excellence software provider, Pegasystems, revealed in a report that consumers are confused about what artificial intelligence (AI) really does, resulting in an apprehensions to use AI-based technology. However, these consumers are somehow directly or indirectly using AI without even realizing it. Pegasystems conducted a survey amongst 6,000 customers in the US, UK, France, Germany, the Netherlands, and Australia, and found that only 36% are comfortable with businesses using AI to engage with them even if this typically results in a better customer experience. Almost 72% expressed some sort of fear about AI, with 24% respondents worried about robots taking over the world. “Though AI has been around for more than 30 years, it has now evolved to the point that businesses can engage with each individual consumer on a real-time, one-to-one basis,” said Don Schuerman, vice president, product marketing and CTO, Pegasystems.

“But our study suggests the recent hype is causing some confusion and fear among consumers, who may not really understand how it’s already being used and helping them every day. Businesses need to focus on using AI to develop applications that provide real value for customers to improve their experiences rather than overhyping the technology itself.” 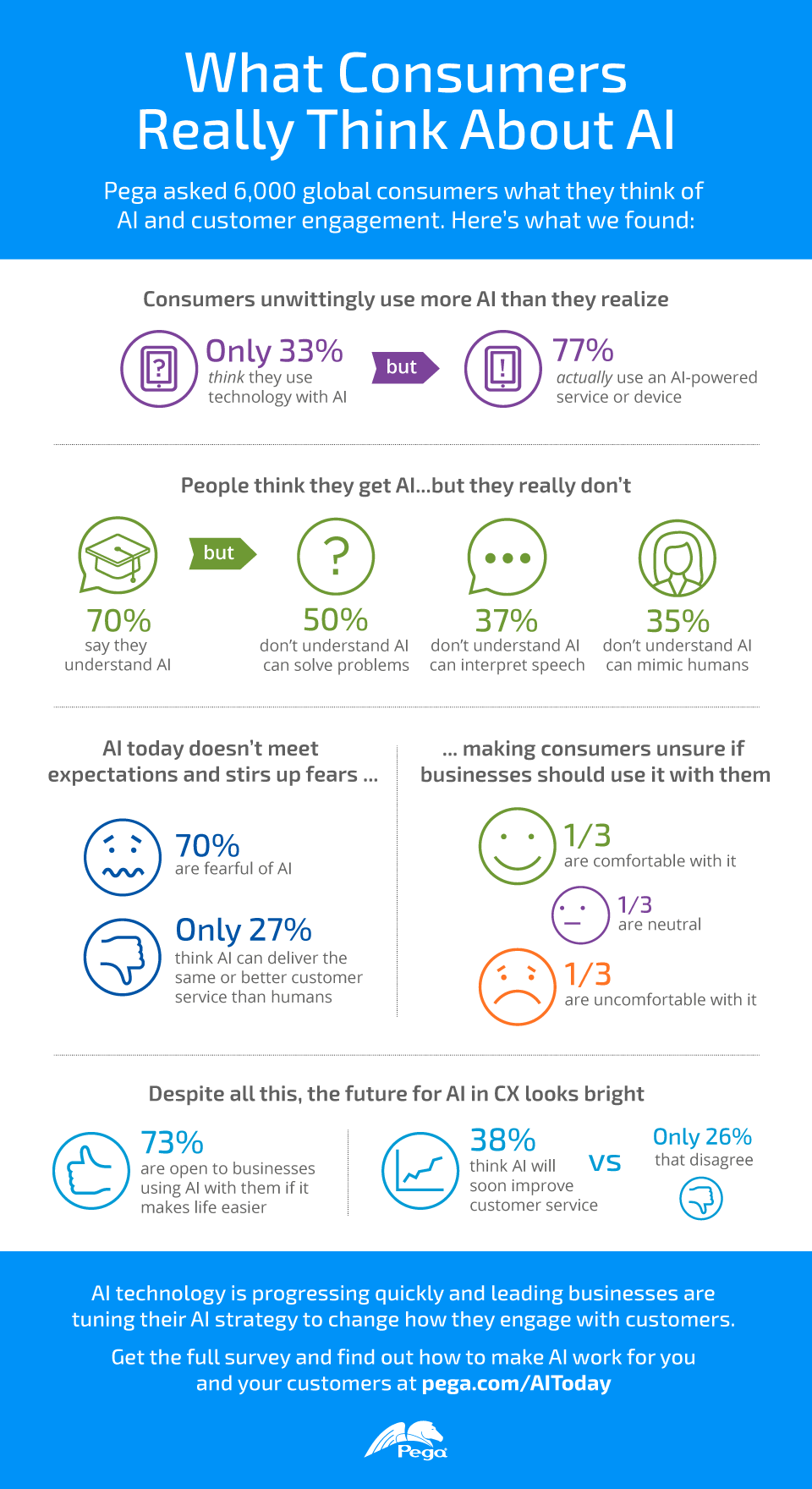 Having said that, only 34% thought they had directly experienced AI, but when asked about the technologies in their lives, the survey found 84% had actually used at least one AI-powered service or device such as virtual home assistants, intelligent chatbots, or predictive product suggestions. 41% of the respondents were able to identify AI-powered devices such as Amazon Alexa and Google Home.

72% claimed they understand AI, but according to the report, far fewer could correctly define what it is or what it can do. The report states that only 37% knew AI has the basic ability to interpret or understand speech and 35% knew AI could mimic humans. 50% could identify some of the most common AI capabilities, like solving problems and 57% knew that AI could enable learning.

Out of the respondents 80% of men think they understand what AI is better than women which stands at 66%. However, 60% women correctly identified that Siri and 43% identified Alexa, are powered by AI than men 54% and 38% respectively. The study also found that respondents above the age of 55 were less comfortable with AI than those aged 18 to 24. they are also surprisingly less fearful of AI consequences – 30% of baby boomers expressed no fears compared to 22% of millennials.

Being comfortable with AI

According to Pegasystems, these misperceptions are important because the study shows they have a negative effect on consumers’ openness to using AI. The data shows consumers are significantly more comfortable with AI if they think they have previously been exposed to it. Only 25% of the people who report no AI experience feel at ease with businesses using AI to engage with them. But for AI veterans, this number jumps to 55%.

Nearly 70% of the respondents said that they want to experience more AI if it will help make their lives easier. Pegasystems claims that the survey results suggest businesses should be more transparent about the fair and pragmatic use of AI in their products and services. Companies should find non-threatening ways to expose customers to its benefits to change their misperceptions and establish trust and comfort over time.