Amidst, funding crunch, and growing losses, Indian e-commerce platform Snapdeal, yesterday, announced that it will be relieving a huge number of its employees to restructure and chase the profit tail. While there was a Twitterati section having fun at the cost of the people laid off with crude jokes like — unboxing 600 lives etc, with obvious reference to Snapdeal’s tagline (we are not going to repeat them here; voyeurs can help themselves with Search buttons), but then not all are insensitive douchebags. All’s not gloomy though. The industry has been quick to respond and has lent a helping hand to the people at Snapdeal, who have been impacted by the decision. Prominent among them is Alok Kejriwal, Indian digital entrepreneur, who popularly goes by the name The Rodinhood has well. He has an offer for e-commerce employees “getting laid off” in his Games2win office in Mumbai. He also has an assurance for them that the company doesn’t “hire and fire” and they were free to check their 16-year old history.

If you are an e-com employee getting laid off / know someone: pic.twitter.com/dY7B79ITA4

Startup media NextBigWhat has been quick to start Project #SaveTalent to help “startup employees handle the layoff mess.” Ashish Sinha, Founder and Editor of NextBigWhat says on the website:

In the last 2 months, close to 2,000+ people have lost their jobs at startups. Many of these job losses are reported (for e.g. Snapdeal firing 600 people, Craftsvilla : 100+), but the truth is that the actual numbers are a lot more than the reported ones (and will only increase in the coming months post shutdowns etc). Several employees and their families are badly impacted by the current market scenario.

The #SaveTalent project aims to be the platform that brings hiring companies and the impacted employees together. To start with the portal has put up a job board for companies who are hiring. And in the meanwhile, it is also also reaching out to those who are firing so that they can get their team members to immediately start applying at these hiring companies. NextBigWhat will not be charging any fee for job listing (and discovery) for the next six months. Anjli Jain, Managing Partner at EVC Ventures reached out on LinkedIn to people affected, to contact the venture firm for jobs at its portfolio companies.

The positions range from CTO to Engineering Manager to Business Analyst to Senior Developer to MIS to Digital Marketing. Abhishek Tyagi, Founder Digishoppers.com too has an offer for Snapdeal employees for Digishoppers as well as his new venture TechTurtle. 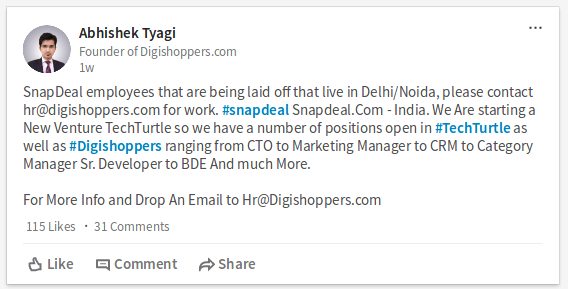 The positions available are CTO, Marketing Manager, CRM, category Manager, Senior Developer, BDE and others. Other companies like ICCS, Stepup HR, Cashkaro.com, WhizKidz Media, TrendyBharat.com, Milkbasket, Realbox.in, have also reached out to affected Snapdeal employees on LinkedIn. Help is coming in from abroad as well. Vivek Kumar, an entrepreneur and Product Management Leader at PropertyGuru Group in Singapore, has an offer for Snapdeal employees willing to relocate to Thailand.

These for sure are testing times and the startup industry has come together to show solidarity. PS: Techseen cannot independently vouch for the genuineness of the offers.