In the realm of private automotive tech companies Uber controls the global market with a $52 billion valuation followed by Didi Chuxing worth $32.5 billion, states a Zirra analysis. A startup that has developed AI and machine learning technology to analyze the private tech market, Zirra, has released a study on the five highest valued private automotive tech companies. The analysis takes into consideration the capital raised, growth strategy and competitiveness as well as hardware and software for the five most valued companies. According to the company, all the companies in the list are ride-hailing apps and it does not consider other automotive tech such as self-driving cars or automotive software companies as a part of the study.

Zirra study states that Uber controls the global landscape with a $52 billion valuation and Didi Chuxing, is worth about $31.5 billion. Lagging behind Uber and Didi are local apps such as Lyft, which values at $5.5 billion in the US, Grab that is valued at $4.2 billion in Southeast Asia, and Ola Cabs at $3.8 billion in India. The AI startup also claims that some of these companies are overvalued. Calculations using its algorithms suggest that Uber and Ola are overvalued at about 24%, while Grab is undervalued at 40%. 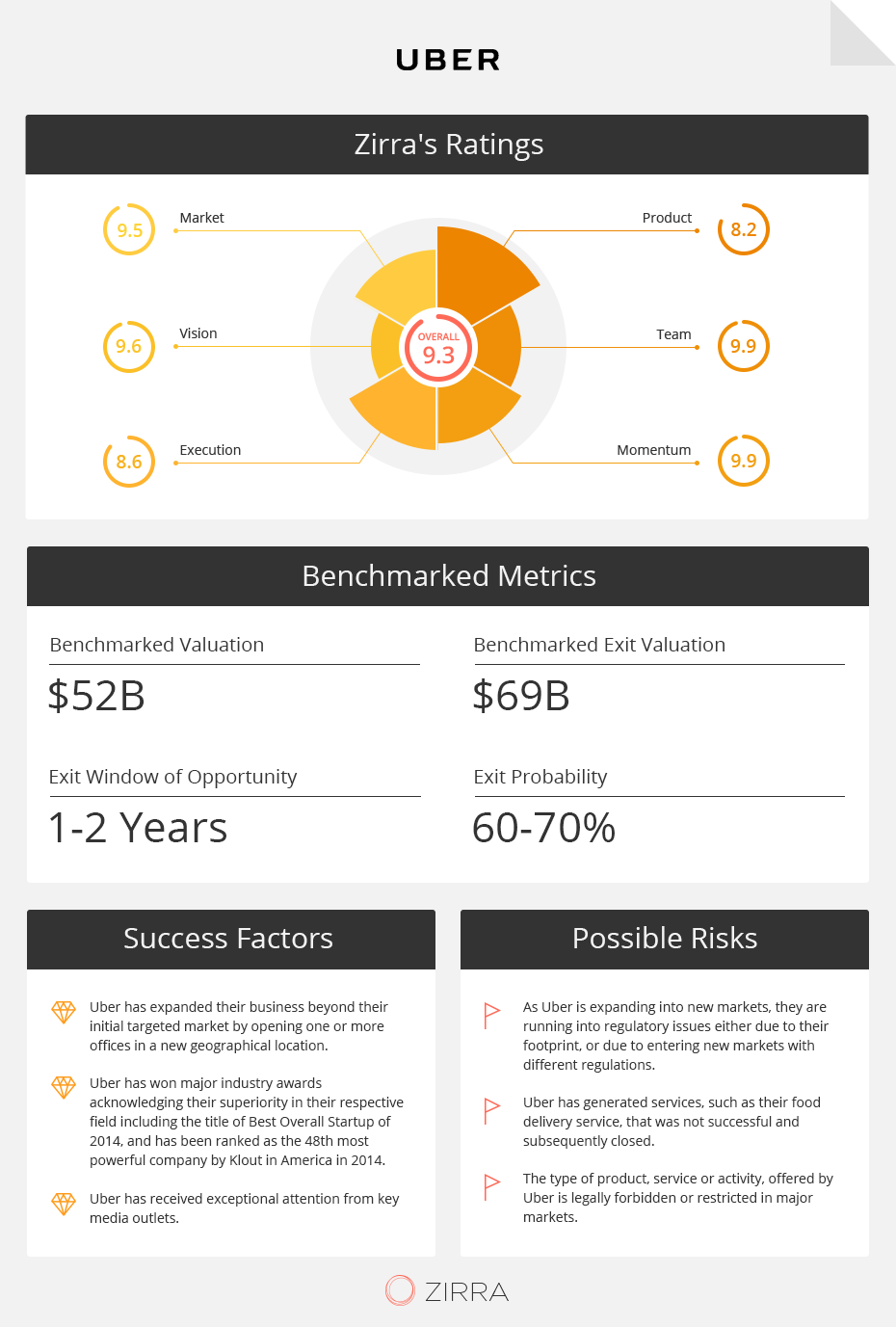 Uber is still not close to profitability, but after ceding the Chinese market in exchange of 20% of Didi Chuxing’s shares , it stopped bleeding cash. But Uber didn’t renounce global reach. The company is still investing hundreds of millions of dollars in its Indian subsidiary to compete with the local rival in the $10 billion market. The study states that the rationale behind Uber’s lead is because of the capital of $15 billion that it has raised and also because it has a global deployment. Uber is also the only company experimenting with a fleet of autonomous vehicles, and the only one that has exercised acquisitions of AI and self-driving car companies, Geometric AI and Otto. Zirra also claims that the ride-hailing app’s carpooling service, UberPool, is by far the most advanced among the five biggest in the category. The pooling infrastructure allows Uber to test better its self-driving car fleet. Lyft has a car-pooling infrastructure as well, but isn’t operating a self-driving fleet yet. 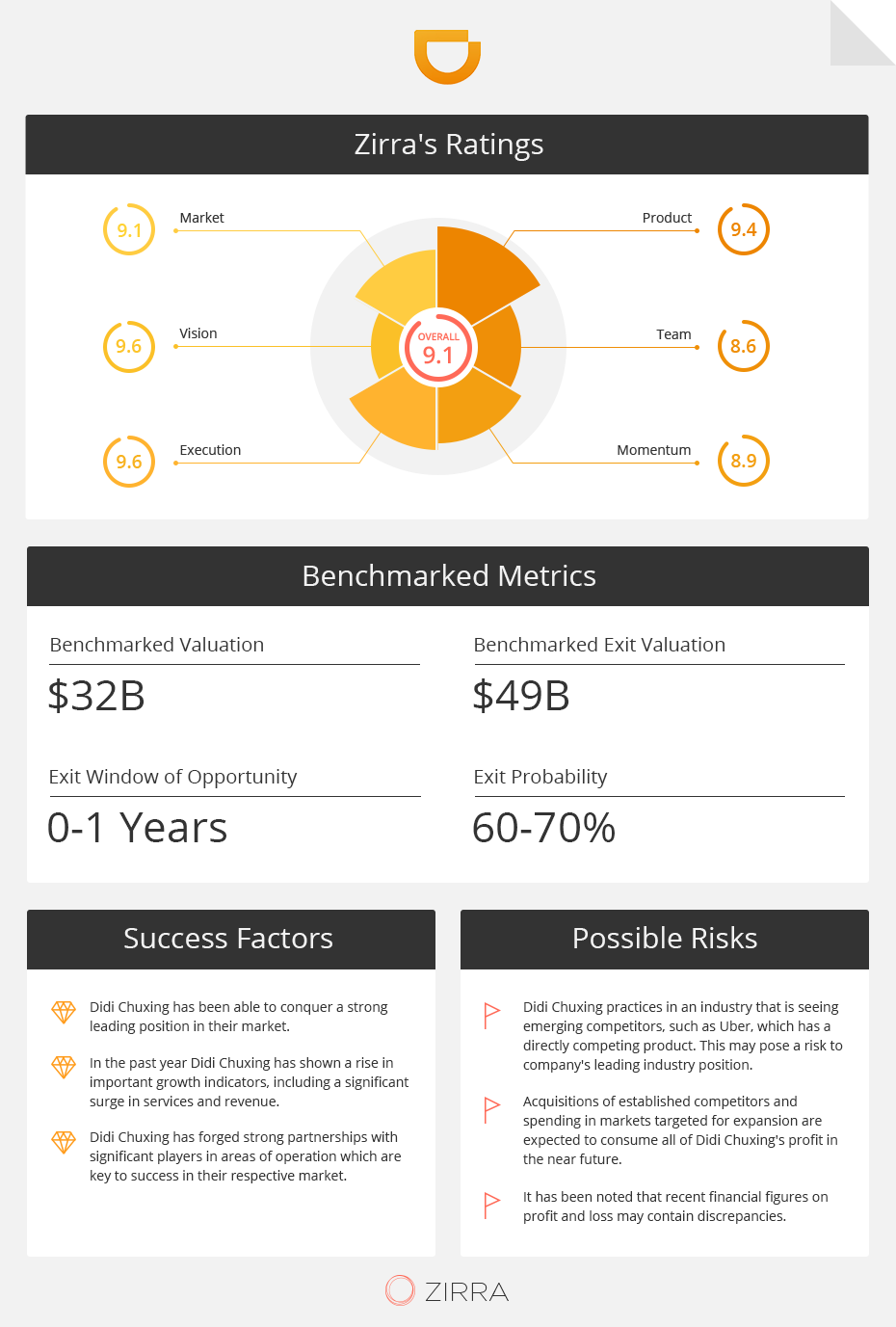 The Chinese ride-hailing app took over the local market after acquiring Uber’s China division, winning the campaign for China, but according to Zirra it is very far from global domination. Zirra’s algorithms value Didi Chuxing at $32 billion, a number that expresses Didi’s victory in China. Didi also announced a strategic investment in Brazilian ride-hailing startup 99, making South America its first territory outside of China. That put Didi in a direct conflict with Uber, which is now a stake holder in Didi. The study also states that because of Didi and Uber’s merger, Baidu is now a shareholder (2.3%), and since the Chinese search engine is already managing an autonomous car pilot at Beijing, it is quite possible that the two will cooperate. Quoting The Information, Zirra states that Blackrock estimated Didi’s revenues in 2016 at $3 billion, and it expects Didi to generate $7 billion in 2017. 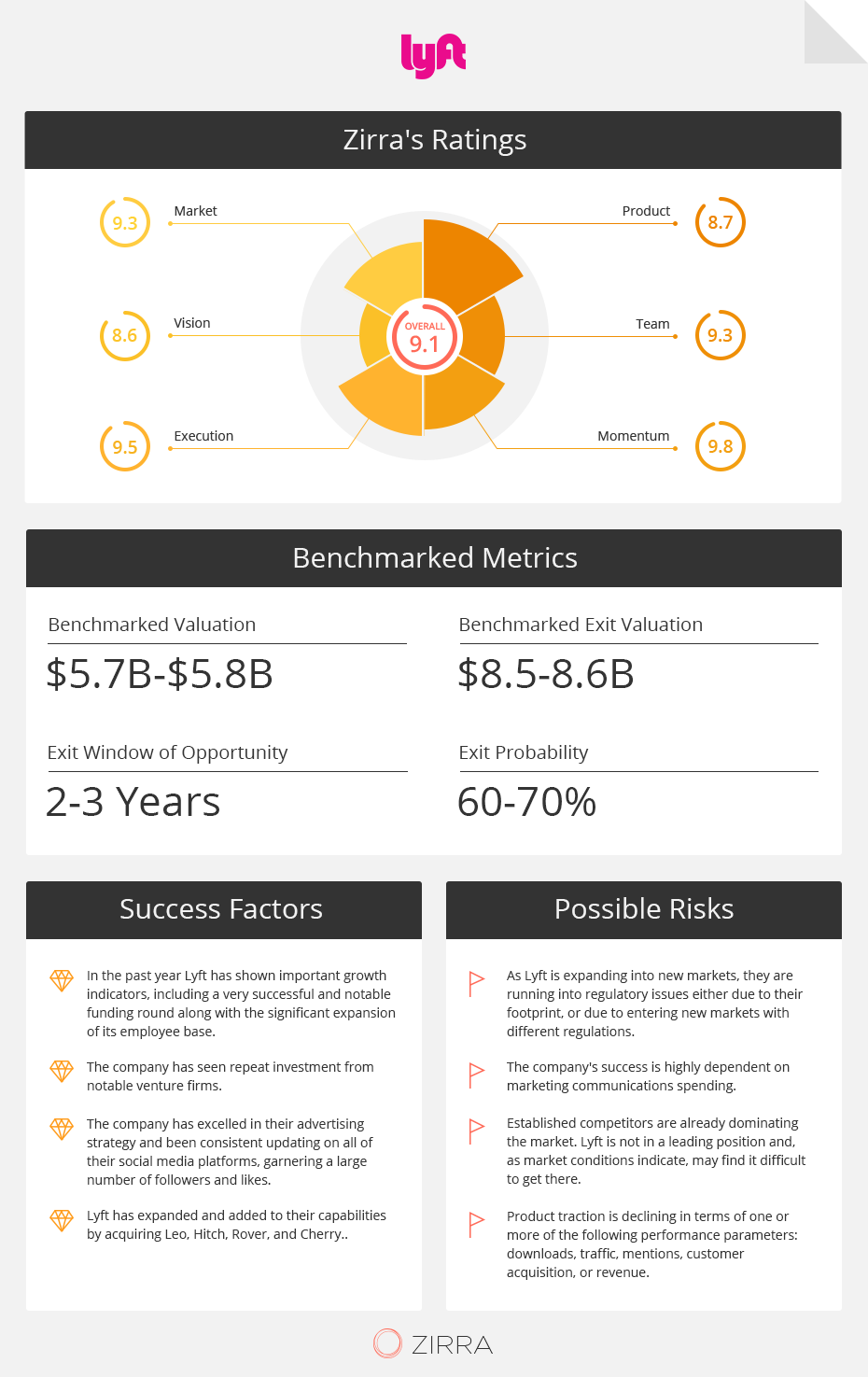 Lyft, ranked third in Zirra’s highly valued companies list, is still a company in a momentum of growth according to the AI analysis company. According to Zirra, Lyft is expected to generate more than $400 million in net revenue in 2017. With 315,000 drivers listed in the service and 5 million active riders, Lyft is on the way to close the gap with Uber in the application stores, states SimilarWeb. Lyft also claims to have the second largest automotive fleet management software in the US that can manage any self-driving or car-pooling services fleet in the future. It partnered with GM a year ago, which paid $500 million (for 9% stake, valuing Lyft at $5.5 billion), and chose Lyft to manage its future autonomous cars fleet. According to The Information, The rise of self-driving cars would also improve the economics of Lyft’s business, as drivers now take 75% to 80% of gross revenue. Nevertheless, there are some risk factors that Lyft is facing for some time: Uber’s truce with Chinese Didi supplied Uber with enough cash and patience to wage a bigger war over Lyft in the U.S. by subsidizing rides. Also, Lyft is still a local ride-hailing app that doesn’t strive to operate outside of the U.S. Zirra claims that the future is pretty unclear regarding who will rule the combination of ride-hailing and self-driving combination. Lyft made a bet on GM and Cruise. It is a low-risk bet, but it is a bet after all. 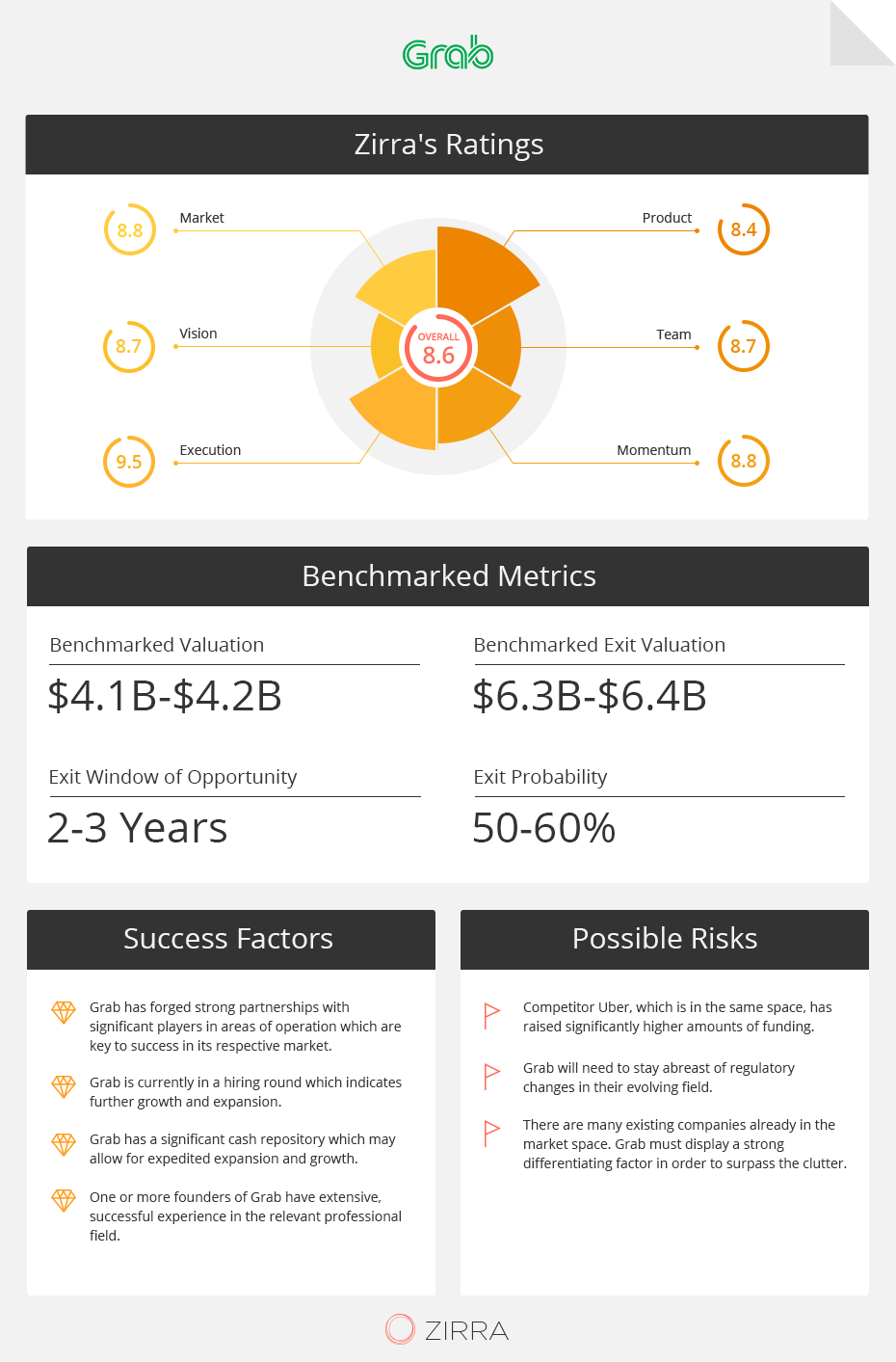 While Uber fiercely fought Didi in China and Ola in India, Singapore-based Grab excelled in taking over the entire Southeast Asian territory. Despite some Uber presence in the region, Grab grabbed Singapore, Indonesia, Malaysia, The Philippines, Thailand, and Vietnam. It is active now in 34 cities in the region, claiming over 24 million app downloads and more than 500,000 drivers. Grab offers motorbike taxis on demand and access to licensed taxis. Lyft, (operating in the US), Ola (operating in India), and Didi Chuxing (operating in China) would be typically considered as competition, but the three have formed a partnership with Grab which allows each to provide their users with only one app yet access the partner services when traveling to those specific countries, as what is informally known as the ‘anti-Uber coalition.’ Zirra quotes The Information again, stating that Grab’s revenues are estimated at $80-$95 million per year, with a $100 million net loss. The good news is that burn rate has fallen to around $10 million a month. Uber is generating in the region 10%-20% less than Grab, but it’s gaining ground on Grab. Uber subsidizes heavily new drivers and riders. It has also partnered with banks to give car and motorbike loans to drivers that are loyal to Grab and are performing well. 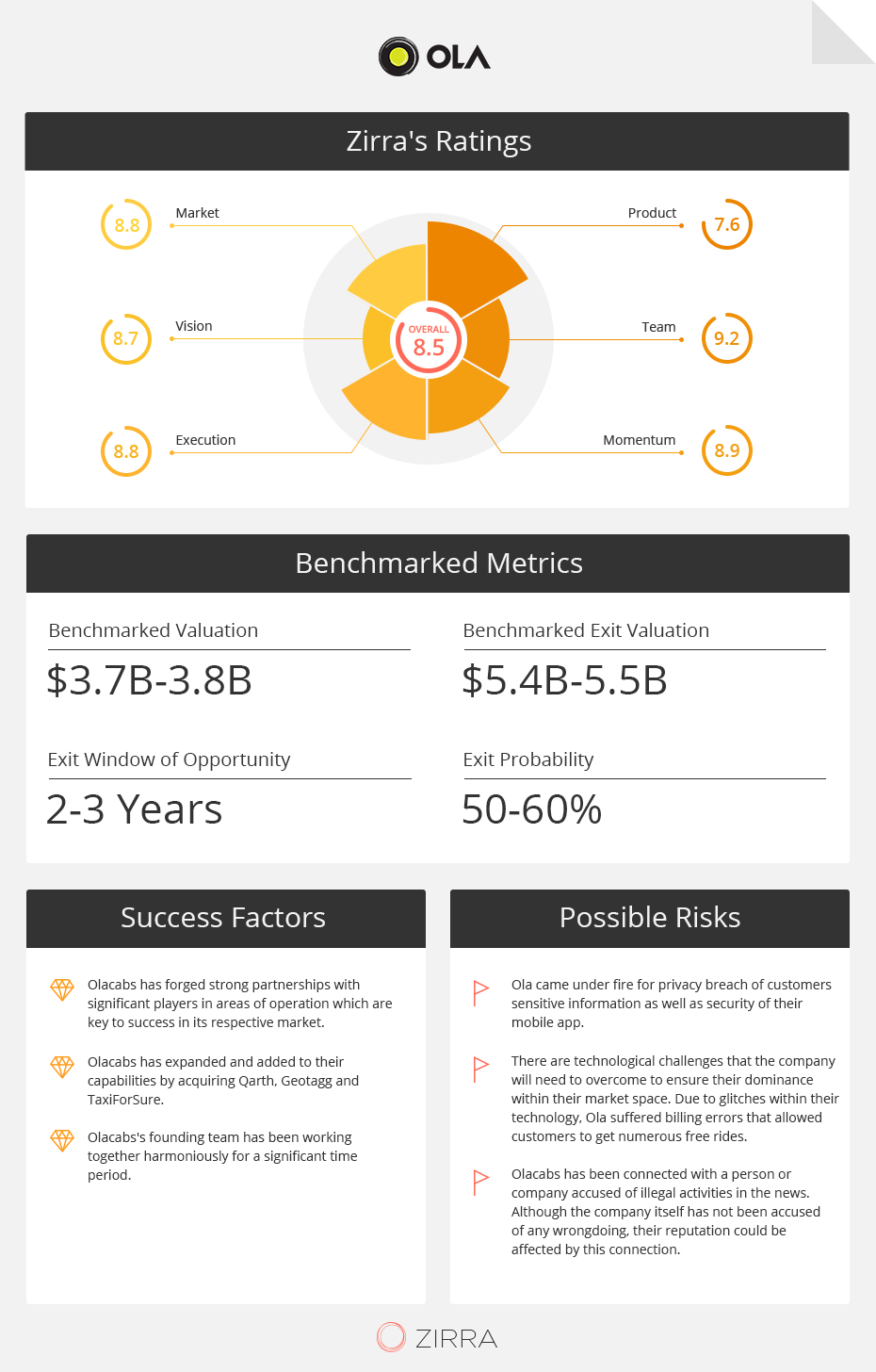 Ola Cabs in India offers multiple transportation services including regular and luxury car service, auto and bike rental service, rickshaw service, bus shuttle, and ride sharing. The Softbank-backed startup claims that the number of drivers has grown significantly, from 10,000 in 2014 to 100,000 in 2015, and last year it boasted 200,000 drivers. Ola has stated that it has plans to reach one million drivers on their platform by 2018. Ola is already operating in 100 cities in India. Zirra states that Ola’s biggest and most significant competitor is Uber and after the Uber-Didi merger Uber is more eager to conquer India. This could spell trouble for Ola, since Uber is better funded and has a much larger global presence and name recognition. According to the study, the challenges from Uber have made Ola experiment into other avenues such as OlaCafe, a food on demand service, and OlaMoney, a partnership with YES Bank where customers can press a button for instant cash to be delivered by Ola. One of Ola’s strengths has been their presence in the smaller towns, something which Uber has stated they are not as interested in. Ola believes its services can have the most impact in these places and is therefore seeking to further their presence there. 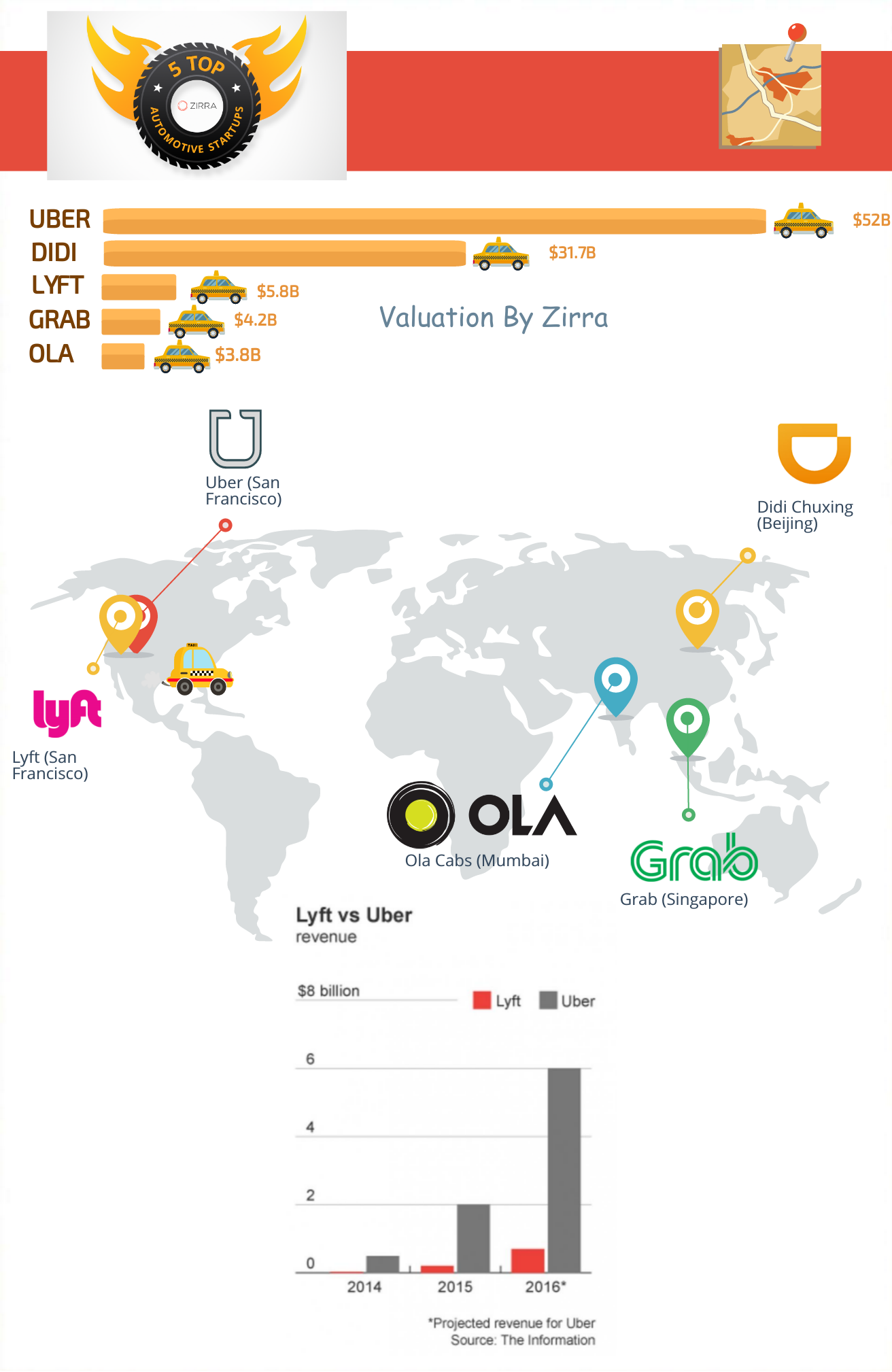 According to Zirra’s study, there will be consolidation in 2017. As 2016 ended with the crescendo of the Uber China-Didi merger, 2017 will probably mark further consolidation. Smaller companies with a short list of investors and a constant need for cash, such as Lyft and Ola, might (continue to) search for buyers. An ABI Research forecasts that global ride-sharing bookings will exceed $100 billion by 2020 and $300 billion by 2030 growing at an average of 18%. However, ABI states that the market could face potential disruption from the advent of driverless taxis, which are currently making their way into the marketplace and could overpower the ride-sharing market.