Zoho has unveiled Cliq, a chat software that blends instant messaging with video, audio, and group conferencing to create a unified communications system for organizations. The software has been made available on native, web and mobile versions that integrates with Zoho and third-party applications to bring relevant data from those applications into the Cliq window, providing chat participants contextual information about the topic being discussed. “More companies around the world are turning to chat for real-time, internal collaboration. But sometimes text isn’t enough, and chat software must also be able handle voice and video communications as well as the documents, images, and other data related to the work at hand,” said Sridhar Vembu, CEO, Zoho Corp.

“Cliq supports this kind of dynamic, company-wide collaboration. And it provides a degree of future-proofing thanks to its unprecedented extensibility and strong developer community.”

According to the company, the software will provide users with real-time messaging between team members and different departments to foster rapid decision-making. Files of any format can be shared via the chat window in seconds. Separate channels can be created for individual teams, specific projects, company-wide discussions, and other collaboration. It claims that channels can reduce the need for time-consuming meetings, while still keeping everyone in the loop.

Group video calls – Cliq’s group video calling feature, PrimeTime, removes the chaos of a normal group video call and lets people take turns speaking to the other video callers. Before they can speak to the group, participants must click on the “Request to speak” button, and the host must approve the request. PrimeTime also allows all participants to chat via text box during the video conference. Audio and video calls – In addition to PrimeTime, Cliq also supports standard, one-on-one and group calls — both audio and video — which users can start right from their chat window. During the call, users can send texts or share files whether they are using the Cliq native or web application or one of the mobile apps. AI-driven communications administration – Cliq delegates administrative tasks to Zoho Intelligent Assistant, Zia. So users can create event and meeting reminders in Cliq, and participants will get reminders before their meeting. However, Zia will create the group chat before the meeting, add all the participants, remind them before the meeting, ask them to share files, take notes, share minutes of the meeting, and archive the group chat for future reference. Zoho and third-party integrations – Cliq works with most Zoho apps, fetching information from the other Zoho apps and letting users view it in their chat window. Additionally, Cliq is available as a chat tool inside other Zoho apps. Cliq also works with popular third-party apps including YouTube, Google Drive, Eventbrite, Crashlytics, and 20 other apps. Animated emojis – As part of the Cliq launch, Zoho is rolling out nearly 100 new, animated emojis – Zomojis – that have been created exclusively for Cliq. The Zomojis take animated emojis to a new level with their vibrant color and rich detail. 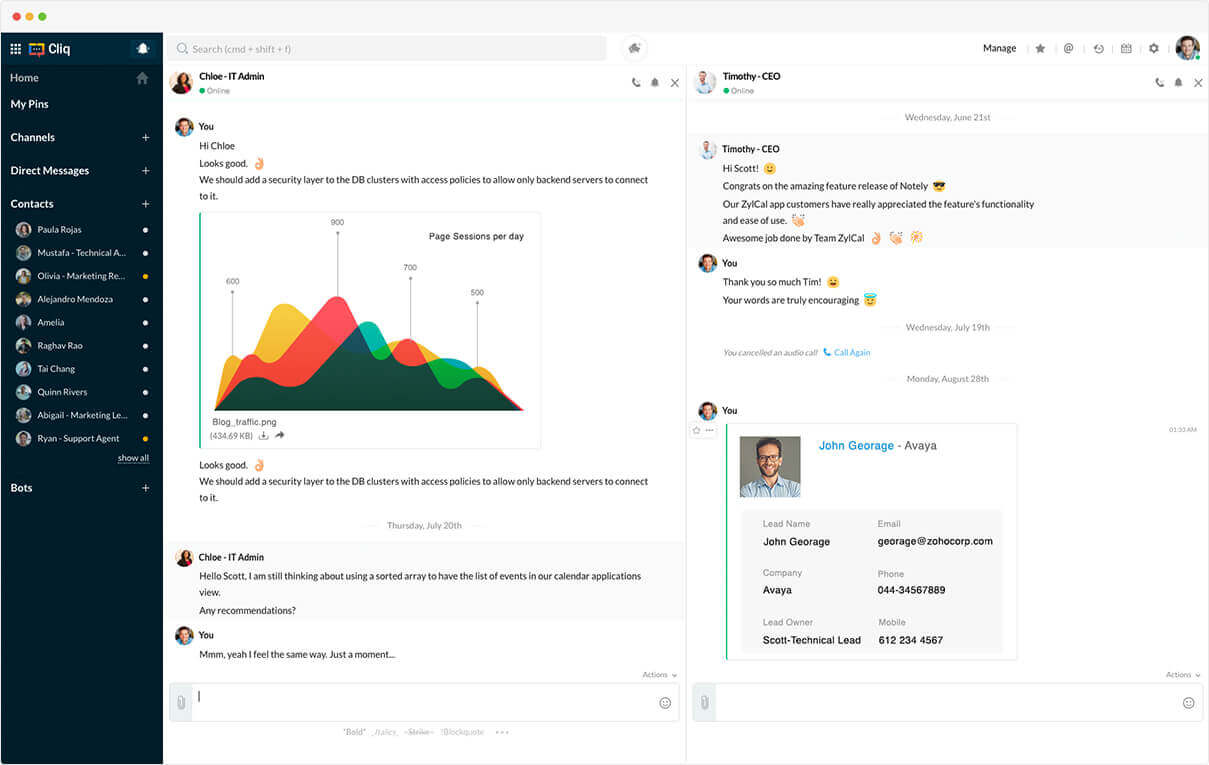 Beyond its rich, out-of-the-box functionality, Cliq can be easily extended to support the unique collaboration demands of any organization. It offers a platform built with Zoho’s own scripting language, Deluge, which allows users to create Chat bots in Cliq and use them for automating internal processes. Similarly, developers can create integrations for Cliq and publish them in the Zoho Marketplace and charge customers to use them. There will be no server requirements, and therefore no maintenance costs. Zoho also does not take any commission for promoting these integrations to customers. The company is also open sourcing its library of Zomojis under the GPL v3 license, so the animated emojis can be freely integrated with third-party apps. Zomoji keyboards for iOS and Android will also be open sourced and published on Github.

“Developers can use the Cliq platform and integrate Cliq with any software that has an open API. It doesn’t take more than 15 minutes to integrate. Once done, Cliq bots and commands fetch information for users when needed. For example, users can check traffic in their area with a traffic bot and Cliq gets you all the info you need,” added Vembu.

Zoho states that Cliq is available immediately as a web application; a native application for Mac, Windows and Linux; and mobile apps for iOS, Android and Windows Phone. In addition to the Free plan, Cliq is available in an Unlimited plan starting at INR 100 ($1.5 approx.) per user per month and decreases when the number of seats increases. Cliq is also included as part of Zoho One. Additionally, it will also be a part of Zoho’s Workplace, an integrated suite of productivity and collaboration apps.

Zoho brings its 35+ business apps under the Zoho One umbrella