If you happened to be a Harry Potter fan, you might be able to recollect a fantastic hocrux of Voldemort- Tom Riddle’s diary. This was a magical object that appeared in Harry Potter and the Chamber of Secrets. If you haven’t read the book, nor watched the movie, Harry Potter finds this diary with nothing written in it. When he starts writing in it, the diary erases what he just wrote. Then the diary itself writes a reply back on the same page. But now, this experience is not just limited to a fictitious plot. Because a ‘bot’ does exactly the same! The internet has been flooded with the term “bot” in the last one month. Simply using the word is connoted to almost magical qualities in apps that would otherwise seem mundane. So does this mark the beginning of yet another app revolution?

As Techopedia defines, ‘an Internet bot, in its most generic sense, is software that performs an automated task over the Internet. More specifically, a bot is an automated application used to perform simple and repetitive tasks that would be time-consuming, mundane or impossible for a human to perform.’ A bot can be analogous to a search engine spider that indexes information about products on the Web. Though e-commerce sites see a massive threat in using shopping bots of this type, their creators feel that they are simply providing a better service to their own users. Given their exceptional speed, bots can perform relatively simple routines and may also be implemented where a response speed faster than that of humans is required. A simple question and answer exchange online may appear to be with another person, when in fact it is simply with a bot.

One might find bots to be an all new ball game, bots are not really new and have been around the internet for many years. If many years ago someone kicked you out of a chatroom for being abusive, or if you got followed by a 100 Apple related Twitter handles because of your extensive tweets on the company, it was all the handiwork of bots. All bots are programmed to act or react in a certain way. For all you gamers out there, gaming bots might be the oldest trick in the book that helped you win a significant advantage by implementing some repetitive moves with the use of a bot rather than manually. Auction-site robots, where last-minute bid-placing speed may determine who places the winning bid is another popular application of bots. To take this a little further, chatbots have fallen fresh off the boat adding new excitement into the app market. For example, the new app-only Atom Bank’s adopted WDS Virtual Agent uses a bot to address queries instantly. The technology learns through experience, analyzing customer behavior, problems and solution success rates, and the more the system deals with an issue, the more efficient and effective it gets in providing solutions. The idea of the bot as a new breed of app was stated by Satya Nadella when he introduced his ideas for Conversation as a Platform at Build 2016. The demo showed how the personal digital assistant Cortana could listen in on a human-to-human Skype conversation and make sense of it. “Bots are the new apps,” Microsoft CEO Satya Nadella said in the conference.

Just as we were at the verge of getting used to the idea that apps are now universal – for the desktop as well as smartphone and tablet – apps have been relabeled as “bots”. The planet’s software giants are swimming in fresh waters to test the vigor of artificial intelligence and Facebook is not far behind. Much like Microsoft, the social network demonstrated a chat bot called Poncho at their recent F8 Conference that uses an animated cat give you weather updates right within the Facebook Messenger interface. In another example, a Facebook Messenger bot guided a user toward selecting and even ordering a pair of shoes from an e-commerce store, all without ever leaving the chat app. So instead of just talking with friends in Facebook Messenger, you can now order a pizza or book movie tickets without quitting the messenger. Sweet! IMIchat, a cloud application that enables enterprises to communicate to any consumer, anywhere in the world, through a single API which supports telecom, will also now enable agents to utilize Facebook Messenger for two-way interactive conversations with customers and allow enterprises to deliver real time, contextual customer service. In case of HP, the company has a printing bot on Messenger. When users send a photo, the bot will respond saying ‘Hey, nice photo,’ and offer printing options too. Users can either send photos to an HP printing location across the globe or connect to their personal printers.

How can a bot be so human?

With the help of artificial intelligence programs that learn from interactions, chatbots are becoming even better at carrying on human-like conversations. These smartly-created pieces of software are able to jump into relevant digital experiences to help a user accomplish tasks or deliver relevant information. DigitalGenius launched its AI platform claiming that it is trained on historical customer service transcripts and integrated directly into the contact center’s existing software. Once enabled, the platform automates and increases the quality and efficiency of customer support conversations across text-based communication channels like email, chat, social media and mobile messaging. Phew! The success of bots can be easily tapped from the rising difficulty in identifying the difference between an online interactions with a bot versus a live human. Many of these bots use advanced methodologies such as deep learning that helps them determine the outcome of a situation or to process a challenge by identifying patterns, analyzing results, then looping their findings back into the system to make smarter choices over time. In terms of personalized experience and natural language processing, you can be a little disappointed on how limited the functionality of these bots are. Still, as the bots move out of beta and evolve over time, it could weave a new experience.

Can bots get “baddie”?

Well, Microsoft’s experimental chatbot, known as Tay sets the best criteria for judgment. Microsoft had to take down this chatbot after malicious Twitter users taught the program to repeat racist and sexist statements. Undeterred, the company has pledged to learn from the experience and build better software in the future. And hey…hey don’t always make things simpler. The bots incorporated by news organizations like CNN and Wall Street Journal clearly added to the user’s misery in their hunt for news. The focus on a few pre-set keywords makes it tedious for the user to seek what he exactly wants. 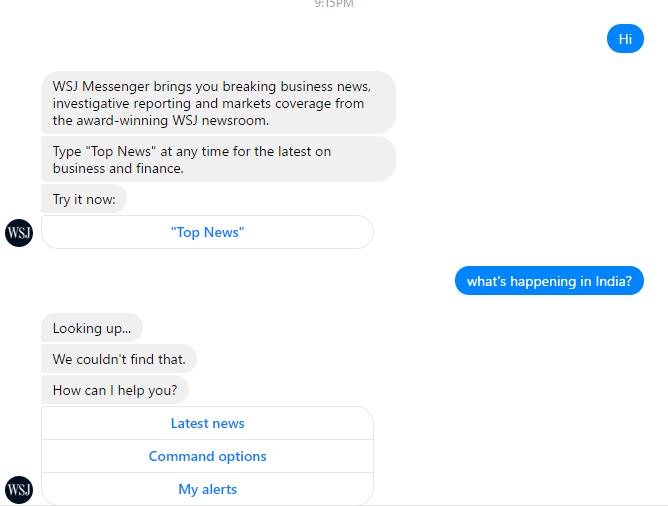 So here we have the same old burger wrapped in a different paper! People hate call center menus — because they are asked to do certain things in specific order with strict instructions. Bots have this same annoying UX! We live in a world where staying relevant is quite a task as software and devices go out of fashion even before they hit the markets and create peak demand. With the engulfing waves of bots approaching at a startling pace, the technology can teeth you down if the periphery is not well-defined. After all, Tom Riddle’s diary was constrained by a popular baddie!