BMW, the German automaker seems to be investing heavily in the connected car space. Earlier in March, at the Microsoft BUILD 2016, it showed off its vision of the connected car services which was built on Microsoft Azure. And now, it has launched BMW Connected, that plans to provide a service experience covering all aspects of personal mobility. It essentially is an overhaul of its existing connected car app and services MyBMW Remote and BMW Connected Classic, which will the company claims to gradually be transitioned to BMW Connected, which will use the Open Mobility Cloud platform as a base. The car manufacturer plans to integrate the vehicle into the user’s digital life via multiple touchpoints, such as an iPhone or Apple Watch and digitally connect the vehicle with smartphones, wearables and connected devices. 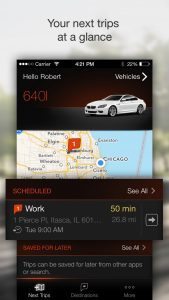 Once the user has set up a ConnectedDrive account and completed a short registration process, they can create a BMW Connected customer profile within the new app. From this moment, BMW Connected, scans for any mobility-related information, such as the addresses and arrival times contained in calendar entries, and notifies the driver about ideal departure time for arriving at their destination punctually on the basis of real-time traffic information. The app can also prove handy for transferring places and points of interest from other apps, storing them as a destination together with the desired arrival time, and then importing them to the BMW in-car navigation system. The company claims that this feature will work with any BMW car that has ConnectedDrive Services, a standard option feature that’s available on all cars manufactured from January 2016. Initially available for iPhone and Apple Watch, the Connected app has also plans to launch the service on Android soon. Amongst other features, it also claims to provide “time to leave” notifications which are sent to the user’s smartphone or Apple Watch to let them know when they have to set off in order to avoid traffic and arrive on time.

With its revamp, BMW is is also building an Alexa skill (a cloud-based voice service that enables customers to interact with devices) platform supported by Amazon Echo smart speakers which will enable users to get vehicle status including remaining range, fuel levels and use commands like “lock doors” through the Echo device (via voice integration).

The Alexa skill integration into Amazon Echo and Alexa-enabled devices demonstrates BMW’s leading role in the area of digitalization. BMW is one of the first automobile companies to release a costumer product supporting voice services and access to vehicle information through Alexa.

“The flexible architecture of BMW Connected furthermore facilitates the implementation of new functions and services more of which will be presented in the autumn,” the company said in a release. The app is expecting an August release with the Alexa update coming later in the year. Although BMW isn’t the only market player here, earlier, Ford experimented with something similar when it decided to tap into Amazon Echo, and launch Ford Sync Connect system where owners could lock, unlock, start and locate their Ford vehicles using their smart phone.