Vendor revenue from sales of infrastructure products (server, storage, and Ethernet switch) for cloud IT, including public and private cloud, grew by 21.9 percent, year over year to $29.0 billion in 2015, as according to research firm IDC. The vendor revenue for the fourth quarter (4Q15) grew 15.7% to $8.2 billion, the research firm said in an official release.

“End customers are modernizing their infrastructures along specific workload, performance, and TCO requirements, with a general tendency to move into 3rd Platform, next-gen technologies. Options on and off premises continue to expand, along with open platforms that enhance hybrid capabilities for a variety of use cases.”

Public cloud as-a-service offerings also continue to mature and grow in number, allowing customers to increasingly use sophisticated, mixed strategies for their deployment profiles. While the ice was broken a long time ago for public cloud services, the continued evolution of the enterprise IT customer means that public cloud acceptance and adoption will continue on a steady pace into the next decade.

From a regional perspective, vendor revenue from cloud IT infrastructure sales grew fastest in Japan at 50.0% year over year in 4Q15, followed by Asia/Pacific (excluding Japan) at 38.7%, Western Europe at 30.5%, Canada at 23.5%, and the United States at 6.6%. Central and Eastern Europe declined 9.3% year over year as the region continues to go through political and economic turmoil, which impacts overall IT spending. 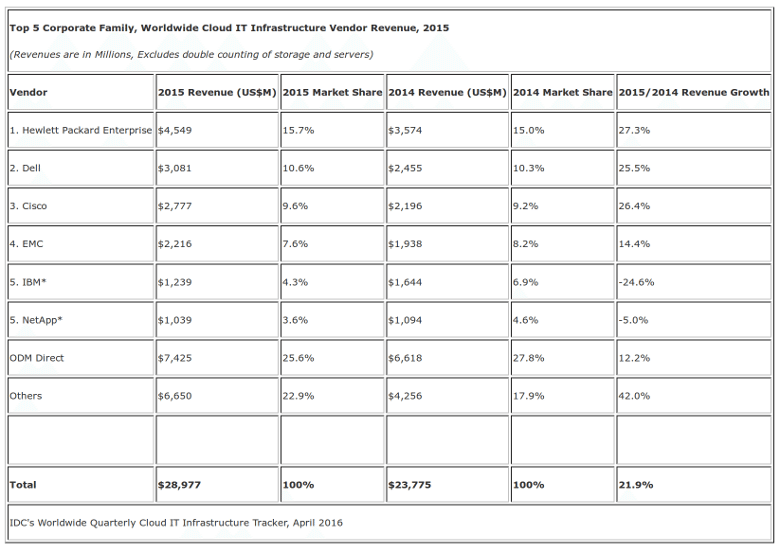