The global unified communications as a service market(UCaaS) is poised for staggering growth, and will be worth US$37.85 billion by 2022, according to a report by Transparency Market Research.

The market will expand at a CAGR of 23.4% between 2014 and 2022 upon its 2013 valuation of US$5.68 billion. The report titled, ‘Unified Communication as a Service Market – Global Industry Analysis, Size, Share, Growth, Trends and Forecast 2014 – 2022’ states that much of the growth in the global UCaaS market will stem from the percolation of the bring-your-own-device (BYOD) and enterprise mobility culture. 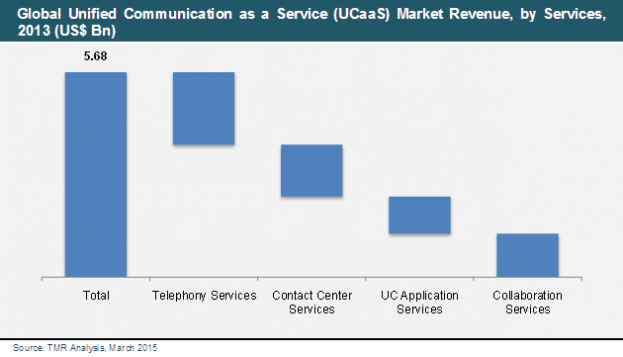 More people are joining the mobile workforce, which increases their dependence on smartphones and tablets. Although large enterprises are familiar with the advantages offered by UCaaS, there is still an awareness gap that exists in the small and medium businesses space. Given its status as a high-potential emerging technology, the global UCaaS market has whetted the interest of enterprises and developer communities alike. The report states that UCaaS, by virtue of being pre-integrated and standardized, makes for a ready-to-go solution that many enterprises can deploy in short turnaround time.

Hosted and on-premise UCaaS solutions are increasingly being deployed in healthcare institutions, government organizations, as well as financial institutions where data integrity is paramount. According to the report, telephony services contributed the largest share (35.33%) to the revenues of the global UCaaS market in 2013. According to projections, telephony services will continue to remain the leading revenue contributor to the global UCaaS market. Integrated services will report appreciable growth, as they are expected to post a 27.3% growth rate through the forecast period.

North America as a leader

When assessed from the geographical perspective, North America stood as the largest UCaaS market in 2013, bringing in an impressive 48.80% of the global market’s revenue. The region will remain in the top position thanks to massive UCaaS investments across sectors such as BFSI, retail, transportation, and telecom.

While in North America, it is the SMBs that contribute to a large share of the revenues, in Asia Pacific, maximum revenue comes from large enterprises that are increasingly making the shift to UCaaS.

However, despite the many positive forces that prevail, the growth of the global UCaaS market will be dampened by concerns pertaining to network security and price sensitivity.

Use Vonage's Nexmo for voice calls from Zoho CRM