Google, in its efforts to build and broaden Spaces, its group chat and collaboration tool (application) has acquired California-based Kifi. A FortyTwo production, Kifi provides a mobile based application enabling users to save, share and chat about content from online websites and will potentially aid Google’s Spaces which was launched in May, 2016. However, the financial and legal details of the deal have not been disclosed by either of the companies. Spaces that assembles Search, Chrome and YouTube in one place, claims that it will use Kifi’s tech team for help and will hopefully, further Google’s foray in building itself a social network after Google Plus. Spaces is available to users on Android, iOS, desktop, and mobile web. The acquisition easily reflects Google’s commitment towards making Spaces work in a mobile messaging market in competing WhatsApp and Facebook Messenger that almost dominate the social app index. It is not yet clear how many Kifi staff will be absorbed by Google but Kifi has decided to shut its services, which it confirmed in a Medium post. Its service and data will not become part of Google and it will remain fully functional for existing users for a few more weeks. Later users will be able to back up and export their data if needed. Also the company is no longer accepting new registrations. Kifi team stated that, “The mission at Kifi has always been to connect people with knowledge. We created a service that seamlessly enables organizing, sharing, discussing, and finding the content you and your team values, which has resulted in more flexible and intuitive collaboration across the internet. We also spent significant time creating a service that overlays context on your browsing and sharing experiences to increase usefulness and understanding.”

We see a lot of alignment to Google’s mission to organize the world’s information and make it universally accessible and useful. Our team will be joining the Spaces team at Google to build solutions focused on improving group sharing, conversation, and content finding. 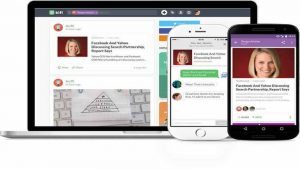 Kifi which was founded in the year 2012, specializes in building extensions that collected and analyzed links shared on social networking services like Twitter. It claims to keep web pages in Libraries, stream research into one pool, and collaborate on it much like Pocket and Diigo. Only time will tell if the acquisition will help Google find a better space in controlling content shared in groups. This is one of many Google buys in recent times, earlier this year Google bought Anvato, a software platform for encoding, editing, publishing and distribution of video content across multiple platforms.