Google has launched a new set of features in Search and Maps that will give actionable insights to a user at the time of a crisis. This means that the search giant will soon start displaying floods, earthquakes, floods and other disasters, natural or man-made, when a user makes a relevant search about the incident or location. During a crisis, the user will be able to see an SOS Alert at the top of search results including maps, top stories and local information about the authorities in the area such as emergency phone numbers, websites, and translations of useful phrases. The company also states that depending on the proximity to the affected area, users might even get alerts and notifications on their mobile devices that will redirect to the information page. Additionally, relevant searches will also show an SOS Alert that provides a timely overview of the situation, in addition to features such as donation opportunities. The search giant will itself be curating this information as opposed to the event being displayed automatically. The company claims that it has teams around the world that will source content from government agencies, first responders, trusted media outlets, and NGOs. Google Maps on mobile can also show SOS Alerts. In Maps, you’ll see a specific icon on the map and card with more information about the crisis, including real-time updates, like road closures and traffic and transit updates. 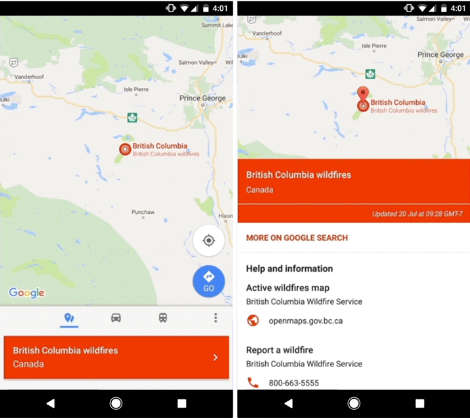 Working in the area of disaster mitigation and response, Facebook also introduced disaster maps which will help response organizations paint a more complete picture of where natural disaster affected people are located so they can determine where resources are needed and where people are out of harm’s way. But here the maps will use user aggregated, de-identified Facebook data to help organizations address the critical gap in information they often face when responding to natural disasters. Facebook earlier had also introduced a Safety Check feature, which provides similar information and lets Facebook users check-in to make an announcement(to their friends list) about their safety during a calamity. Back in 2012 Google had introduced a new Crisis Response Project called Google Public Alerts, a platform designed to bring users relevant emergency alerts. The tool was also let out organizations that wanted to make their emergency data available to the public using the internet. Along with Google Public Alerts and SOS Alert, the company also has tools such as Google Person Finder and Google Crisis Map that work on similar lines. The company states that once, Radio and Television were the main source of information about calamities but now, mobile phones and the internet are the places people go to.