You can’t have enough when you shop and regret when the credit card bill pops up? A personal finance website, finder.com, has launched an IoT enabled handbag, that claims to curb impulsive spending by shopaholics. Being called the iBag2, the handbag was first introduced in Australia two years back, and is now seeing the light in a new enhanced and evolved avatar. Comparatively the improvements have been made in design and technology of the iBag2; for instance, the original iBag does not feature the iBag2’s self-lock mechanism when entering a shopping danger zone. Instead, the original only locks at specific vulnerable spending times. Other upgrades include a more powerful microprocessor, electromagnets, couture design, bluetooth technology and sunscreen application reminder.

iBag2 says ‘NO’ to impulsive spending

This purse claims to conveniently curb the amount of spending of shopper. It has an inbuilt computer module, Bluetooth, GPS tracker, LED lights, vibration motors and inbuilt IoT chips to guide the customer from making impulsive purchases. The bag analyzes the spending habits and chalks out where to stop the customer, as it automatically locks itself when the shopper enters a ‘danger zone’ while shopping. Michelle Hutchison, Money Expert at finder.com said, “The iBag2 is one possible solution to impulsive spending as it features in-built technology to make shoppers aware of their spending urges in the moment and can even physically deter them from accessing their wallets when they are at their most vulnerable by self-locking.”

What is inside the bag? 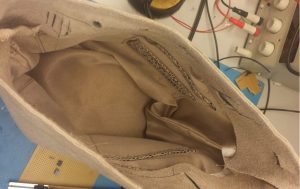 Customers know exactly where they spend a lot, so the bag can be programmed as per the geographic location and it also can be programmed with the times of day that the customer is prone to spend along with GPS and geofence that identify the high spending zones. It counts the number of times the wallet is taken out of the bag and if the customer has programmed it for, example, 15 times, the bag gets automatically locked after the wallet is pulled out 15 times. The RFID gets activated whenever the wallet is taken out of the bag and the LED lights constantly gives a cue to the customer about the danger zone. In close proximity to the danger zone the electromagnets in the bag will close so that the customer cannot open it in order to take the wallet. Now the question here is, when it will unlock again? When the customer is out that ‘danger zone’, the bag tracks the GPS and unlocks itself. Tile tracker can be activated using bluetooth and the app, in case the bag is stolen. The bag also comes with a fast charging power bank, battery capacity of 10,000 mAh, with two USB ports; one to power the bag and one to charge a smartphone or any USB-chargeable device. It also includes a backup 9V battery attached to the microprocessor. The company claims to be developing a wallet which will complement the iBag2.

The need for iBag2

So what is the need to develop such kind of wearable? Shoppers in UK owe over £63.3 billion in credit card debt, up by £2.3 billion in 2015 compared to the previous year, according to the UK Card Association. More than half of credit card debt (58 percent) is accruing interest, worth £36.7 billion. A finder.com/UK study of 2,000 British adults conducted by Mortar London, found that British credit cardholders spend £43.2 billion on impulse purchases using plastic – half of the items are not even wanted. The study found that the average Brit spends £1,394 on impulse purchases on their credit cards each year – 2.6 times every month. That’s 7 percent of the UK’s £600 billion annual spend on credit cards.