Computer Technology Company NVIDIA has unveiled an energy efficient, palm-sized computer, powered by artificial intelligence (AI) that vehicle manufacturers can use to power automated and autonomous vehicles for driving and mapping. This palm sized computer, is a new single processor configuration of NVIDIA’s DRIVE PX 2 AI computing platform made for AutoCruise functions. The function includes highway automated driving and High Definition mapping and consumes just 10 watts of power. This is where the AI comes in; according to the company, the processor enables vehicles to use deep neural networks to process data from multiple cameras and sensors.

How will it help?

The new processor is positioned to help automakers and their suppliers accelerate the manufacturing of autonomous and automated cars. NVIDIA claims that a vehicle using the small form-factor DRIVE PX 2 for AutoCruise can understand in real time what is happening around it and locate itself on an HD map to plan ahead.

Rob Csongor, Vice President and General Manager, Automotive, NVIDIA said, “Bringing an AI computer to the car in a small, efficient form factor is the goal of many automakers. NVIDIA DRIVE PX 2 in the car solves this challenge for our OEM and tier 1 partners, and complements our data center solution for mapping and training.”

Liu Jun, Vice President of Baidu said, “Baidu and NVIDIA are leveraging our AI skills together to create a cloud-to-car system for self-driving. The new, small form-factor DRIVE PX 2 will be used in Baidu’s HD map-based self-driving solution for car manufacturers.” 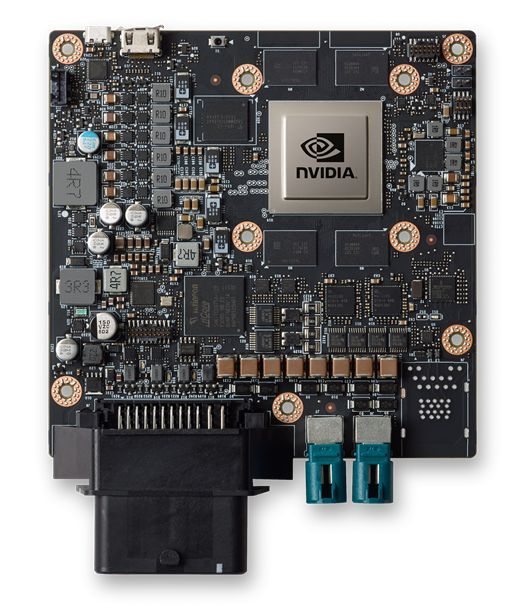 According to the company, the NVIDIA DRIVE PX 2 is powered by the company’s newest system-on-a-chip, featuring a GPU based on the NVIDIA Pascal architecture. The company claims that a single NVIDIA Parker system-on-chip (SoC) configuration can process inputs from multiple cameras, plus lidar, radar and ultrasonic sensors. It supports automotive inputs/outputs, including ethernet, CAN and Flexray. NVIDIA states that more than 80 automakers, tier 1 suppliers, startups and research institutions developing autonomous vehicle solutions are using DRIVE PX. The processors’ architecture scales from a single mobile processor configuration, to a combination of two mobile processors and two discrete GPUs, to multiple DRIVE PX 2s. This enables automakers and suppliers to move from development into production for a wide range of self-driving solutions, from AutoCruise for the highway, to AutoChauffeur for point to point travel, to a fully autonomous vehicle. This approach leverages NVIDIA’s unified AI architecture, and enables cars to receive over-the-air updates to add new features and capabilities throughout the life of a vehicle. Reportedly the availability to production will be in the fourth quarter of this year. DriveWorks software and the DRIVE PX 2 configuration with two SoCs and two discrete GPUs have already been made available for developers working on autonomous vehicles.