IDC has revealed a new research study on Salesforce, detailing how the CRM company and its ecosystem of customers and partners will drive nearly 1.9 million new jobs and more than $389 billion in new GDP impact worldwide by 2020. According to the research, when Salesforce released its first product in 2000, cloud computing was in its infancy, an unproven computing technique. In fact, cloud computing didn’t surpass 1% of IT spending until 2009. But despite its small share of the $2 trillion IT market, cloud computing has been a major contributor to growth in IT spending, growing at 4.5 times the rate of IT spending since 2009 and expected to grow at better than 6 times the rate of IT spending from 2015 through 2020. 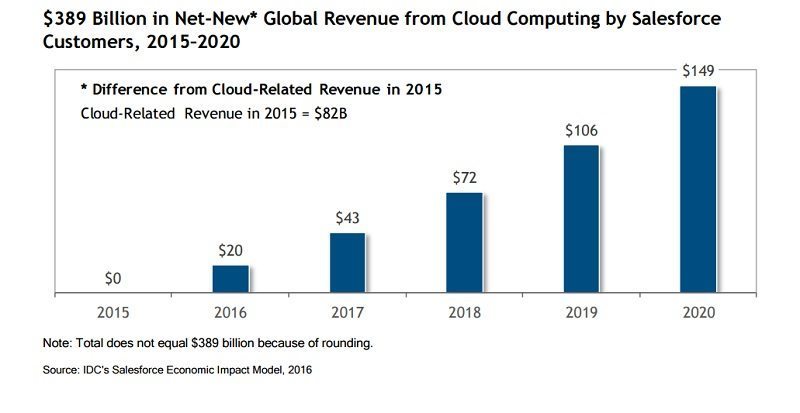 IDC claims that cloud for computing has generated more jobs in the CRM company by permitting an increase in IT innovation, which in turn has supported business innovation and increased revenues in local markets.

The study further claims that Salesforce’s spending in public cloud accounts is less than 5% of total IT spend and 15% of total software spend today, but is expected to grow at six times the rate of overall IT spending from 2015 through 2020.

“The cloud represents an enormous opportunity for customers and partners to transform every industry, create jobs and accelerate economies around the world,” said Tyler Prince, EVP Alliances and Go-to-Market Innovation, Salesforce.

“Our continued focus is empowering our partners with the right resources to thrive in the ‘Salesforce economy’ and help our customers grow and succeed,” Prince added.

How Salesforce will impact its business ecosystem?

IDC’s research revealed that every cloud subscription sold is accompanied by other products and services. These can include additional cloud-based subscriptions (for storage or security), additional applications to increase productivity, (for digital signature or administration), or even hardware or networking. Hence, in addition to the direct jobs and GDP contribution created by Salesforce and its ecosystem of partners and customers, IDC also uncovered several other key findings in the report: 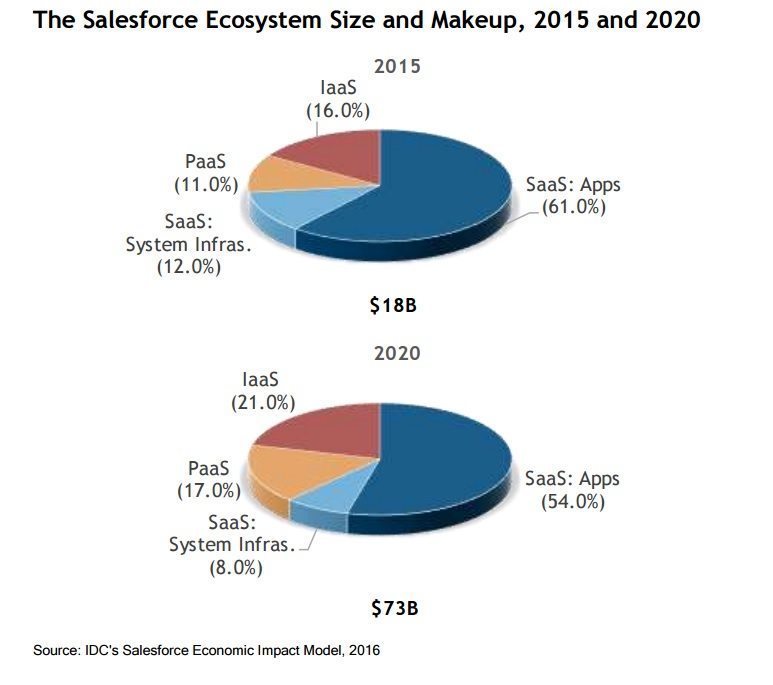 The study claims that customers have now installed apps from AppExchange, Salesforce’s business app store, more than 4 million times. A single install can be used by hundreds of users within a company or organization. This builds upon recent momentum for the AppExchange, including:

Trailhead is an online learning environment where anyone can develop skills that empower them to participate in the “Salesforce economy.” Since launching in 2014, trailblazers have earned 1 million badges. These badges directly relate to in-demand job skills. According to a recent report from Burning Glass, a job market analytics firm: “We’re helping trailblazers reinvent their resumes for the digital economy,” said Sarah Franklin, SVP Developer Relations and GM, Trailhead, Salesforce.

“There’s clearly high demand for Salesforce-skilled employees in the marketplace, and we’re proud to say Trailhead is empowering anyone, anywhere, at anytime to learn the technologies necessary to land their dream jobs.”