A hundred years ago, in 1911, Konstantin Tsiolkovsky – the father of modern cosmonautics – remarked in a letter written to his friend that humanity will one day explore and conquer the solar space. And now after tens of decades have passed, development in space tech has only validated the Russian scientist’s premonition. We have been to the moon and back, have decoded so many celestial mysteries. SpaceX has almost emerged as the Google of the industry. But did we stop at that? Hell, NO. Because we had to see space technology at work at homes too. And not only in the form of a hi-tech chips in televisions or a heavy-duty alloys for your automobiles! Sometimes, the uses and applications were hidden in our houses. VentiFresh – an odor eliminator – not just got any space technology but a technology employed by NASA in its International Space Station (ISS). Too hard to believe, right? For the longest time now, sodium bicarbonate has been a popular home remedy for eliminating foul odor. Commonly available as baking soda, it tends to reduce the acidic properties of those household items in our homes that smell rotten. And it is here that VentiFresh thought of introducing space technology to our homes in a way so trivial that most people didn’t realize it can be done. So what is it that this new product Ventifresh has to offer anyway? VentiFresh decomposes the volatile organic compounds that create odors. But doesn’t an air freshener do exactly the same thing? Yes, but not without adding additional chemicals in the air. The first thing that VentiFresh founder, Jerry Linthe, make abundantly clear is that no chemicals are used in the making of their product, nor are any chemicals released into the air around when employed. So breathable air, atleast in your homes, will not be infused with any masking chemicals. That’s a relief! Now, this little thing is designed to work in an enclosed space of up to 1.5 cubic feet. And the compact unit comes with a fully functional ventilation system, combining UV LED lighting and platinum dioxide technology to break down odor molecules into carbon dioxide and vapors, thus neutralizing and reducing the formation of foul odors. Not only this, as the compounds are decomposed instead of being absorbed, the need for filters is completely eliminated in this device. So it becomes maintenance-free. Talk about using space tech and now you’ve got a photocatalyst air purifier to your disposal! Now didn’t I say the technology was used by NASA? You must be still wondering “how”. The idea for VentiFresh was derived from technology that has been used at the ISS for years to purify air and water. The UV photocatalysis process, which is the reversal of photosynthesis, needs a catalyst. Here the UV rays are used because photocatalysis needs a powerful light source. LED semiconductors act as a light source and generate light for the process to take place at a smaller scale. Yeah, all this goes into one 2-inch device! Coming to the installation part, it is not as complex as the design. Just spare a minute and you’ll be done putting it anywhere – trash cans, refrigerators, shoe closets, gym lockers, and even a diaper bag. And yeah, now you have to never worry about replacing baking soda tablets every week because VentiFresh is absolutely maintenance-free, and ten times more effective than baking soda. 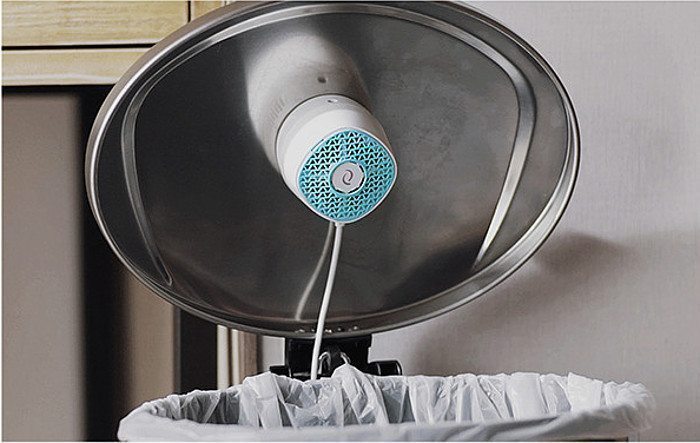 Charging it is easy as it is powered by an external rechargeable power bank or a power plug, so VentiFresh automatically starts working via an embedded light sensor. It is powered by a USB charger having a consumption capacity of no more than 3 Watts per hour. Now you have a feel-good living environment, hands-free and nose-happy! And the good news is that it is chemical-free, eco-friendly, easy-to-use, energy efficient, and has no maintenance cost. Any drawbacks then? Yes, a few. You can use the odor eliminator only for small enclosed spaces and is not really meant to deal with bad odor from large areas with fuming industrial pollutants. A drawback of sorts, is that if you do not have a power outlet nearby, Ventifresh will not be able to function. But your doubts don’t end here, do they? You must be wondering if this product will burn a hole in your pocket. Time to have a sigh of relief! VentiFresh is priced at $46 (per unit) with more than 200 backers on Indiegogo. Worth a shot, don’t you think? The company has exceeded its target by 226% raising $57,307 so far, (goal was set at $25,000). This must be good enough a figure to pump up its manufacturing as the response from people is visibly getting only better. I wouldn’t want to lead you by the nose, but who nose [sic] stinky locker rooms might just be a thing of the past.