Chinese e-commerce company Alibaba has stepped into the “connected-cars” market after officially announcing the launch of OS’Car RX5 — a Sport Utility Vehicle dubbed as an “internet car.” Available for pre-order in China, the car has been developed in collaboration with Chinese automaker SAIC. Alibaba Group claims to have set its eye on expanding the internet-of-things (IoT) to the automotive sector in the coming future and after more than a year of development and testing, its first smart car has been unveiled, hoping to set the grounds for its driverless vehicle technology. The RX5 mode boasts to be the first internet-connected car powered by Alibaba’s homegrown operating system, YunOS. The company uses this OS to power its line of smart home appliances, including refrigerators, vacuum cleaners and air conditioners.

“YunOS for cars is a smart operating system from Alibaba Group which is tailor-made for the automotive industry,” the company said in a statement.

What is so “smart” about Alibaba’s car?

According to Alibaba, with functions based in the cloud, this smart car is deployed with a series of innovative features like an ‘intelligent map’ that, according to the company, “won’t require WiFi or GPS to track the vehicle’s location.” 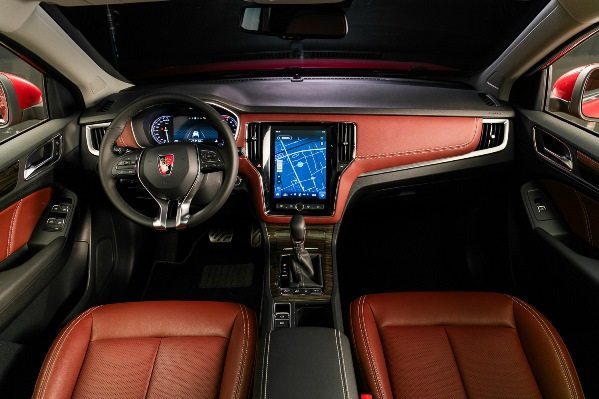 Being the first car with an “Internet ID”, the car also claims to have driver identification through connected smartphones or smartwatches. Furthermore, the ID also enables the car to make recommendations for music, air temperature or nearby restaurants based on past trips.

“YunOS will make cars an even more indispensable part of human life in the future society. Today marks the dawn of that new era. We feel proud and privileged to be playing a part in driving that change,” said Jack Ma, Executive Chairman, Alibaba Group.

To bring in a more personalized experience, the smart car also claims to provide Internet services such as greetings, preferred music and destinations. The standalone feature of this car is its ability to use Alibaba’s Alipay payments service to pay for parking spaces, fill up with gas or buy a coffee. “Our vision is to enable Internet-connected cars to become the largest open platform capable of incorporating all kind of services, both from YunOS or third-party developers,” said Zhang Chunhui, President, YunOS.

In the future, we hope Internet-connected cars to be a solid foundation for the development of smarter transportation and smarter cities.

The company also plans to continue leveraging consumer data to tailor the features to each individual driver.

Catching up on the “fun” element

The company states that the RX5 SUV comes equipped with three LED screens and up to four detachable action cameras that can record the entire journey and capture 360-degree in-car selfies. The selfies can also be instantly shared with friends via the connected smartphone. Dr. Wang Jian, Chairman, Technology Steering Committee, Alibaba said:

The difference between an internet car and a traditional car is that connected smart operating systems like YunOS will improve the consumer experience beyond just driving,

“Smart operating systems become the second engine of cars, while data is the new fuel,” he added. Drivers will also get a drone mounted on the top of the car, which can be controlled via the car’s built-in system. The car also claims to be voice-controlled and the driver can command directions through smart voice control, creating a “more natural and safer driving environment.” In March last year, SAIC and Alibaba jointly agreed to invest 1 billion Yuan to develop the internet-connected car, marking Alibaba’s first foray into the new battleground of the auto sector. The car has already hit the Chinese markets priced at for Yuan 99,800-Yuan 186,800 ($14,900 – $27,900) approx.