An engineer in Bangalore draws on average $8,600 (INR 564,590 approx) a year, according to the ‘2017 Global Startup Ecosystem Report‘ published by Startup Genome. The figure is not only 13X cheaper than in Silicon Valley, it also is the third cheapest annual salary of an engineer in the world.

In the Talent Index, Bangalore, according to the report, has challenges with Access and Quality. Engineers haven’t been hired very quickly, experience is average and visa success is low; but the bang for the buck is still hard to beat, as Bangalore’s engineers are some of the most cost-efficient in the world. The primary reason startups move to Bangalore, according to the report, is because it is easier to find good technical employees. The only other ecosystem where this was strongest reason for incoming startups was Toronto-Waterloo.

“Though we’re a US-based startup, our development team sits in Bangalore as it’s relatively less expensive. It is definitely the capital of India in terms of concentration of tech talent and startups,” Abhimanyu Godara, Founder and CEO, Bottr.me, was quoted as saying by the report.

However, this also means there’s lot of churn among the employees who move around a lot to seek better opportunities, according to Godara. Ravi Narayan, Global Director, Microsoft, credits the accelerated evolution of Bangalore’s startup ecosystem in the last decade “predominantly” to its strong technology population. “This combined with the phenomenon of seasoned entrepreneurs exiting and entering the ecosystem as investors and mentors to the startups, sets the stage to building world-class deep technology startups from the city. It is a historic juncture for Indian tech startups as they are poised to take on larger problems and enter the global stage,” Narayan says. 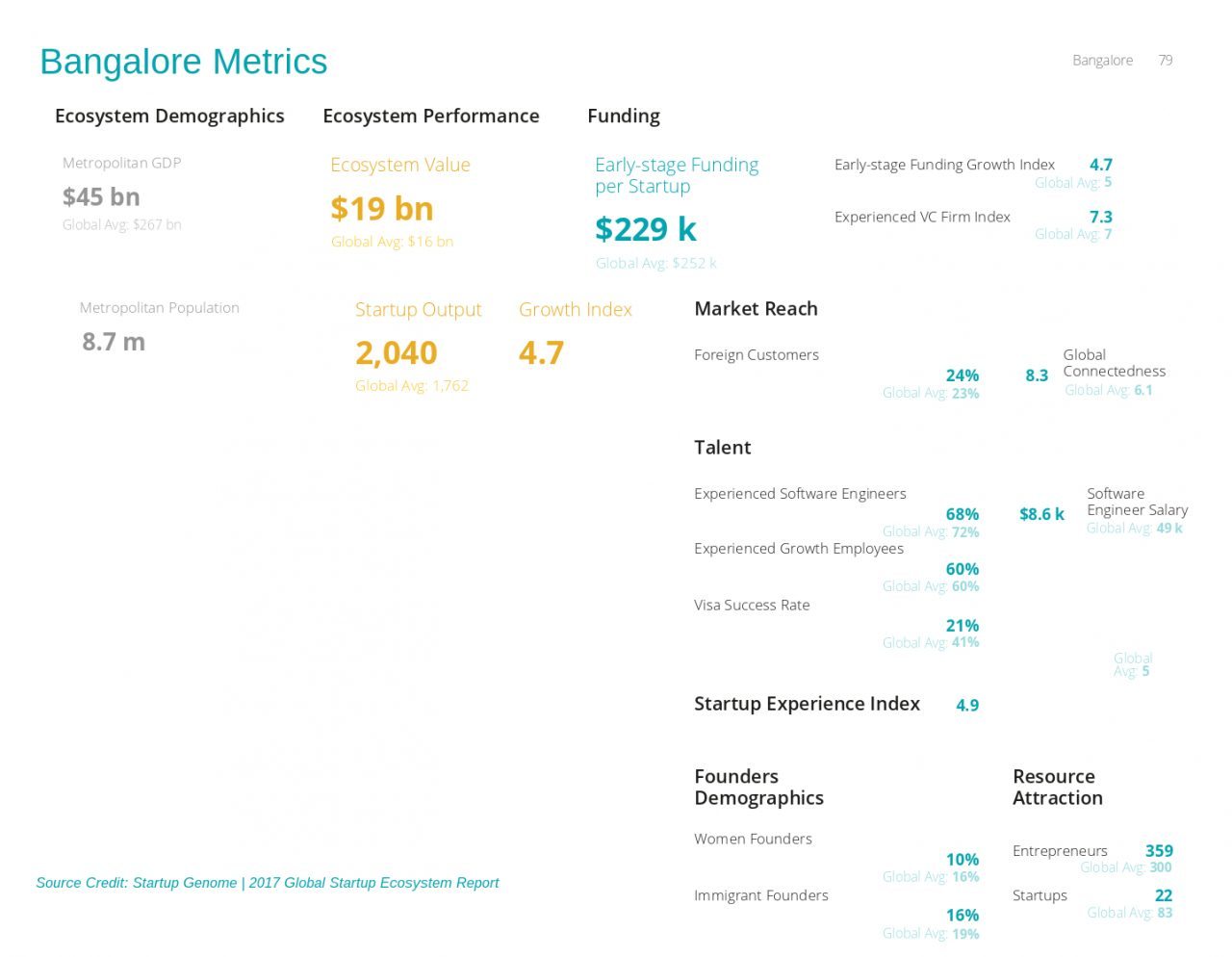 The report states that 94% of Bangalore founders have a technical background, the highest rate in the world. Having said that, the city, on the flip side, has one of the lowest percentage of women founders in the world, with only 10% founders being women. Bangalore, according to the report, though confirms its position as the country’s leading startup hub, yet it drops in the Global Index from rank 15 to 20. As per Startup Genome estimations, the city has 1,800-2,300 active tech startups.