Microsoft has made its Cloud App Security generally available as the latest addition to the secure platform that it is building. This app helps clients track the use of SaaS applications within their organizations. The company has made this move post the acquisition of Cloud App Security firm Adallom last year that protects sensitive data stored in the cloud. Microsoft has recently renamed it to Cloud App Service. Adallom is a comprehensive cloud-delivered service built for IT and security teams to help combat one of the top security concerns of deeper visibility, stronger controls and enhanced protection for cloud apps.

According to Microsoft’s blog, cloud applications are being used by most enterprises today and more corporates are choosing to store data on cloud rather than on-premise. Companies are using the cloud and even those enterprises without SaaS apps are having to deal with Shadow IT usage of the cloud. Shadow IT is when hardware or software within an enterprise is being used that is not supported by the organization’s central technology department.

Microsoft’s Cloud App Security solution provides a set of capabilities to help companies design and enforce a process for securing cloud usage; from discovery and investigation capabilities, to granular control and protection. It is easy to deploy, setup and use and provides out-of-the-box value immediately, as well as rich tutorials for unlocking advanced capabilities.

According to Microsoft’s TechNet article about Cloud App Security, the service uses an organization’s cloud traffic logs to find out what cloud based SaaS apps are being used. It looks into firewalls and proxies to discover and pulls data using the APIs of the cloud based SaaS apps. Microsoft then ranks the SaaS apps according to the risks based on regulatory certifications, industry standards and best practices. 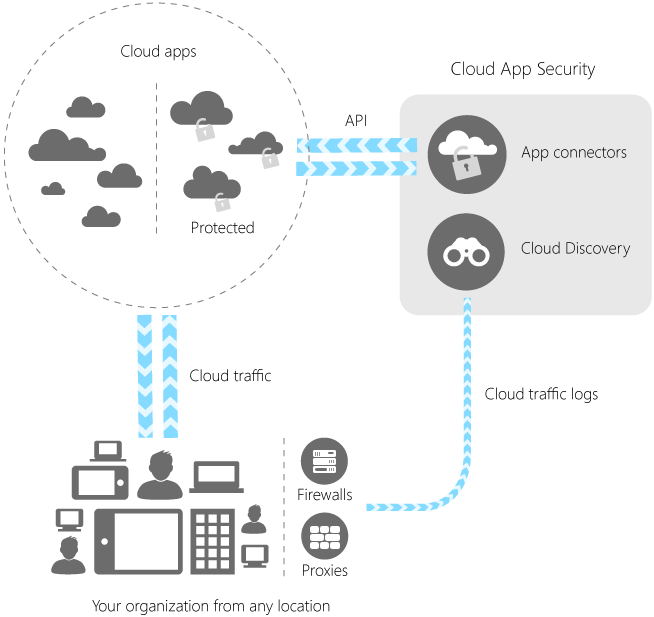 Microsoft’s blog that talked about the Cloud App Security being generally released talked about the Shadow IT challenges enterprises face and how the app will put things into perspective. It pointed out that:

Microsoft claims that for security teams, it is important to have deep visibility, strong controls and threat protection for cloud apps and the Cloud App Security provides organizations with an easy and comprehensive solution to gain visibility into cloud app usage and start controlling it via policy.