Have you ever felt like supporting a novel cause like making a small school in your neighborhood or helping people badly affected by a cyclone? But the one thing that generally pulls you back is the lack of ‘capital’. And in this case, who else can help you better than you family, friends or your extended ‘virtual community’? Keeping this in mind, Facebook has come up with its own crowdfunding tool to help users raise capital online for non-profit causes. https://www.facebook.com/facebook/videos/10155658957681729/ The “personal fundraiser” feature will allow people to raise money for themselves, a friend or someone or something not on Facebook, like a pet or crisis relief. The tool will be first made available only in the US for people aged 18 years or older, and in beta over the next few weeks. As for verification of integrity of the campaign, there will be a 24-hour fundraiser review process and since only users with real Facebook profiles can initiate a funding, donors will get full transparency to know how they are connected to the person who created the fundraiser.

“When people mobilize around the causes they care about, it builds a safe and supportive community. Our charitable giving tools have made it easy for people to raise millions of dollars for nonprofits to support those in need directly on Facebook. Today we are expanding those tools to include personal fundraisers, as well as more options for people to continue to fundraise for nonprofits,” said Naomi Gleit, Vice President, Product Management for Social Good, Facebook. 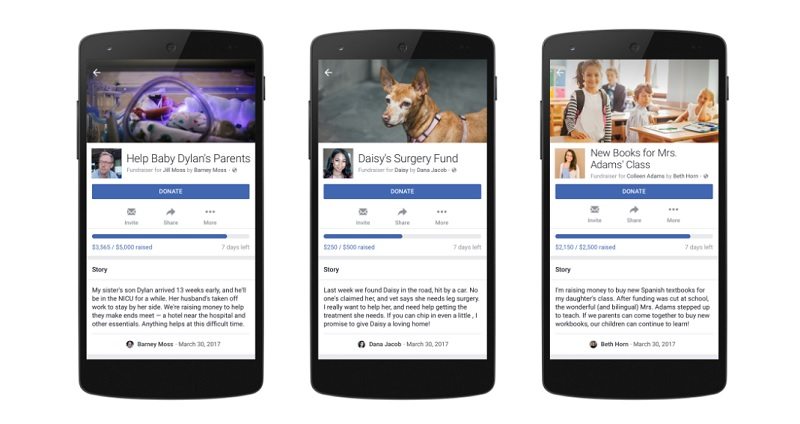 The fundraising will first cater to six specific categories for critical financial needs namely education, medical needs, pet medical, crisis relief, personal emergencies and funerals. This is not the first time Facebook is venturing into personal fundraising segment. In 2015, the company announced a fundraising feature at par platforms like Crowdrise and Kickstarter. This enable users to raise capital for non-profits through a campaign page with goals enlisted and provided a provision to collect cash. The company claims that in 2016, it made it possible for people to raise money for more than 750,000 nonprofits through fundraisers, and donate buttons in their live broadcasts and posts. This time, Facebook has announced that verified Pages can add donate buttons to their live broadcasts. And like its previous fundraising products, people watching the live broadcast can donate as they watch, or give once the broadcast has ended and is posted on the Page. While a tool like this definitely comes across as a competitor to other crowdfunding platforms like Indiegogo, GoFundMe and Kickstarter, Facebook’s Social Good team is surely hoping to extend to concept of peer-to-peer payments (as in Messenger) and induce awareness towards good causes.