IBM has unveiled its new Bluemix OpenWhisk, allowing developers to build feature-rich, intuitive applications which easily connect to the Internet of Things and tap into advanced services such as cognitive and analytics without the need to deploy and manage extra infrastructure. Bluemix OpenWhisk has been positioned as a serverless computing platform that leverages Docker and features new user interface updates that claims to drive efficiency for developers. According to IBM, OpenWhisk, which runs on Bluemix, IBM’s cloud platform, is one of the only serverless models which enables developers to deploy their code as Docker containers, transforming how containers and OpenWhisk can be used together to innovate. Unlike other platforms, developers can immediately begin building with containers on Bluemix, without the hassle of configuring and connecting prerequisite programs and code.

OpenWhisk is a cloud-first distributed event-based programming service. It represents an event-action platform that allows developers to execute code in response to an event. OpenWhisk provides users with a serverless deployment and operations model hiding infrastructural complexity and allowing users to simply provide the code they want to execute. It provides a distributed compute service to execute application logic in response to events and is an event driven programming model which uses Docker Containers. 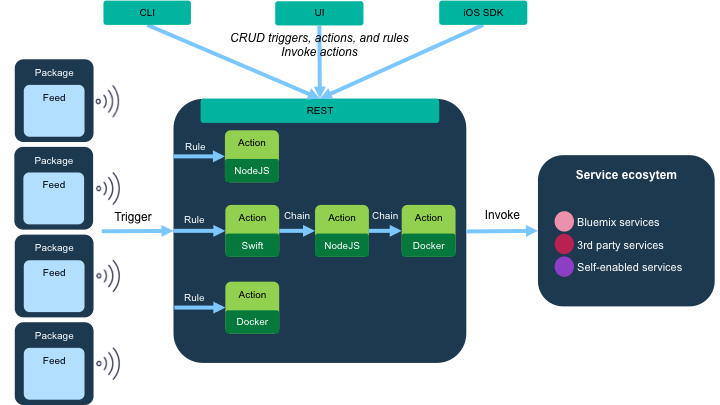 Docker containers wrap a piece of software in a complete file system that contains everything that can be installed on a server, like code, runtime, system tools, system libraries. This guarantees that the software will always run the same, regardless of its environment. IBM and Docker offer integrated container solutions that can meet the diverse needs of enterprises. Supporting the creation and deployment of multi-platform, multi-container workloads across hybrid infrastructures, IBM and Docker accelerate application delivery and enable application lifecycle management for Dockerized containers.

How does serverless computing work?

Serverless computing refers to a model where the existence of servers is simply hidden from developers to relieve them of operational and infrastructural details such as scalability, high-availability and infrastructure-security. It reduces maintenance efforts to allow developers to quickly focus on developing value-adding code. It also encourages and simplifies developing microservice-oriented solutions in order to decompose complex applications into small and independent modules that can be easily exchanged.

What are the new tools and UI?

IBM claims that the new tools, NPM Module and Node-RED, will enable developers to rapidly build event-driven apps, which automatically execute user code in response to external actions and events. IBM will also begin rolling out new updates to the OpenWhisk user experience to make it easier for developers to create these portable, intelligent apps, including step-by-step workflows, new wizards to configure third party services and feeds, and a new editor to manage sequences of actions. According to the company, as the emerging trend of serverless computing transforms the speed of development, these new tools and features will enable developers to use containers in new ways:

IBM announced the Bluemix OpenWhisk platform as an open and cloud-first event-driven programming service in February. The tool’s compute model allows developers to quickly build microservices which execute code in response to events – such as the clicking of a mouse or the receipt of sensor data from an IoT device. IBM Bluemix OpenWhisk is an initiative of developerWorks Open, IBM’s community of more than 100 open source projects to help developers collaborate and build with innovations in IoT and analytics such as Apache Quarks and Apache SystemML. The company claims that by integrating Docker support, Bluemix draws more than 20,000 new developers each week, who are creating more than 120,000 apps every month. It has grown rapidly to become one of the largest open, public cloud deployments in the world. Based in open standards, it features over 140 tools and services spanning categories of big data, mobile, Watson, analytics, integration, DevOps, security and the Internet of Things.