In a move to outflank cloud-based team collaboration tool Slack, Microsoft has launched its own workplace communication service dubbed as Microsoft Teams in beta version. In an event held in New York City this week, CEO Satya Nadella revealed that the new product will be available as a service that will directly tie into current Office 365 subscriptions. Previously known as Skype Teams, the new service is reportedly under development for 18 months. Kirk Koenigsbauer, Corporate Vice President for the Microsoft Office team describes Teams to be “the new chat-based workspace in Office 365. Microsoft Teams is an entirely new experience that brings together people, conversations and content—along with the tools that teams need—so they can easily collaborate to achieve more.”

Launched in 2011, Office 365 supports many platforms ranging from desktop to mobile, on-premise to cloud, and natively supports Windows, iOS and Android. Now the software pioneer is making an all-out effort to convert businesses from Office to Office 365. Teams will be integrated inside Office 365 and aims to bring to its users security, compliance and interoperability across Office and Office 365. According to the software pioneer, Office 365 is designed for the unique workstyle of every group and includes purpose-built applications, all deeply integrated together.

A take on Slack?

After going through the functions and capabilities of Teams, it’s as plain as day that it does bear a resemblance to Slack with a similar aim — to provide a common platform for workplace communications and organizing tasks. Even the user interface is similar with a sidebar where chats, meetings, shared files and activity notifications can be accessed. Teams’ conversation view also allows users pull in these files, notes and project boards directly into their chats. 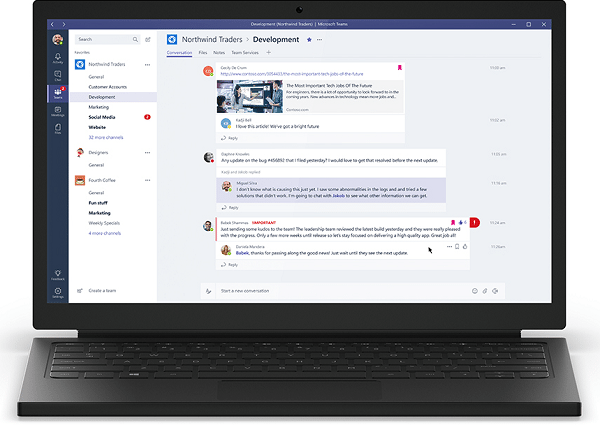 A few months back, rumors about Microsoft considering to buy Slack hit the news, but the former instead nourished its own communication service-Skype, adding more color to it with the new AI chatbots. A report by TechCrunch even claimed that Microsoft went ahead to settle the Slack deal for $8 billion. But looks like there was a bigger ball game at play! So is Slack likely at risk? Well, that is difficult to determine till Teams is made publicly available. However, if Microsoft can cling on to it Office 365 pricing model and play around with interesting bots to upscale the user experience, Slack would definitely suffer a setback, losing its unalarmed winning position.

What holds in the cart?

Microsoft revealed that Office and Skype will both be deeply integrated into the new service while Word, Excel, PowerPoint and OneNote will all be built into it. SharePoint, Power BI and Planner have also been integrated into Teams to accommodate businesses that rooted in this ecosystem. Exchange, Microsoft’s mail server, will be used to provide notifications and users can look up for the contacts, as well as search across files and chats. During the launch, Microsoft also demonstrated one can push messages from particular Twitter accounts into chat rooms, building a scope to hold virtual polls, or share custom meme images. Another interesting integration is that of Skype, which would allow chat room members to quickly assemble for video calls to discuss a project from any location. So the employee or team can view the history of a conversation and interact with each other without having to switch between applications. Teams’ preview is available immediately across 181 countries and the service will be generally available to Office 365 commercial customers in the first quarter of 2017. Yes, Microsoft is late in the race and that gives Slack a roaring edge with some three million active users. However, the software company’s strides in adding next-gen tools and features adapt to the dynamic workforce might pay off well. As long as it takes Slack’s advice, which came as a full-page ad, laying out all that it has learned since its launch seriously!

(Too impatient to wait for a paper copy? We put the text online: https://t.co/WFxflKkVx3 But, support the print media and buy a copy!) 📰