NEC Corporation, a US-based Information and Communications Technology (ICT) provider has reported a successful trial for a system that identifies areas where there is danger of a landslide occurring. The trial was conducted in collaboration with Thailand’s National Disaster Warning Center (NDWC). NEC integrates its technology and expertise to provide “Solutions for Society” to promote the safety, security, efficiency and equality of society, In April 2015, Japan’s Ministry of Internal Affairs and Communications and Thailand’s Ministry of Information and Communication Technology issued a joint statement announcing that the two countries would cooperate in a wide range of areas, including the development of more sophisticated disaster prevention ICT and the use and application of the technologies. This trial supports the disaster prevention cooperation project between Thailand and Japan.

“NEC will continue to contribute to the development of more sophisticated disaster prevention ICT and the use and application of the technology for preventing disasters in Thailand, such as landslides and flooding,” said Minoru Hirata, General Manager, Smart Infrastructure Division, NEC Corporation.

“Further, we will harness the experience and knowhow gained through this trial to actively promote the system to other countries in Asia that experience frequent damage from landslides,” Hirata added. NEC joined NDWC in conducting verification experiments with a flooding simulation system in Uttaradit Province in Northern Thailand between November 2015 and March 2016. The trial reported here is a follow-up to that work.

How does the prediction system work? 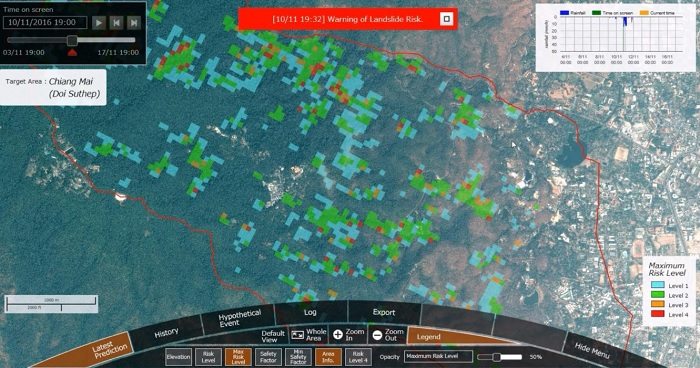 This integrated system can perform detailed simulations and can provide hourly-basis prediction for a period of up to seven days in advance. This allows NDWC to issue warnings to threatened areas before the landslides occur, helping to reduce potential damage. Moreover, even during periods when no disaster is forecast, areas at risk of landslides can be identified by performing simulations using previous rainfall data, which enables hazard maps to be prepared.

“The system is optimized for Thailand and is expected to have a role in the operations of the Department of Disaster Prevention and Mitigation and the NDWC. With the ongoing cooperation of Japan, the Thai government will continue to expand the simulation area,” said Thavorn Charoendee, Executive Expert, National Disaster Warning Center.

HID Global can now forecast the future location of an item