Amidst the excitement looming over the tenth season of the Indian Premier League (IPL), sports digital platform Rooter has partnered with the Gujarat Lions to create a slew of features on its app which will enhance the experience of every Gujarat Lion fan using Rooter. The app will feature customized homepages, chat forums and even profile pages for the Rajkot-based team fans, through which they can show-off their love for the team. Rooter’s homepage has gone through a massive revamp prior to this year’s IPL, with an exciting UI that features cricket right on the screen for fans to quickly connect to their favorite team during matches.

“Gujarat Lions has been a revelation in the IPL last year and fans are eagerly awaiting the return of probably one of the strongest teams on paper. With hard hitters such as Brandon McCullum and Dwayne Smith coupled with the all-round cricketing genius of the likes of Dwayne Bravo and Suresh Raina, fireworks are expected out of the team this year,” said Piyush Kumar, CEO and Founder, Rooter.

“Rooter wanted to play its part in adding to the fervor of its fans by providing them with a unique space on the app, so that they can proudly show-off their love for the team and celebrate the ‘Jalsa Jeet Ka’ in a proud way,” he added. The app interface also has a ‘connect with’ tab that allows Gujarat Lions fans to interact with each other during the match, adding each individual fan’s cheer to the collective frenzy. Furthermore, Gujarat Lion’s fans will have a dedicated profile page that will be exclusively decorated with imagery and information about the team. From profile pictures in Gujarat lion’s jersey to proclaiming the love for their team through customized wallpapers and themes, the fans for Gujarat Lions definitely have an edge on Rooter. 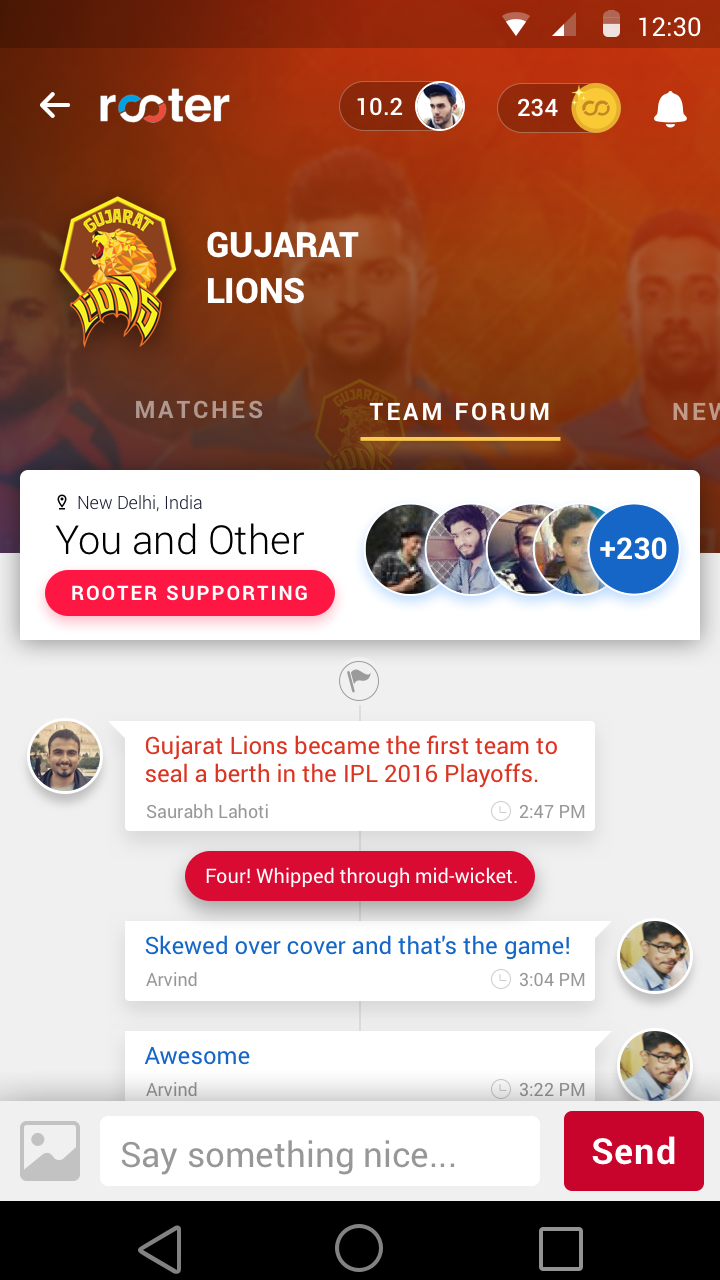 “As sports is an extremely emotion-driven phenomenon and the sports fan engagement platform is a completely unexplored territory, Rooter has boundless possibility for progress. With this unique concept, all the GL fans will be able to interact with each other during the match,” said Keshav Bansal, Director, Intex Technologies and Owner, Gujarat Lions.

Interestingly, Rooter also recently raised an undisclosed amount of funding from Intex Technologies to strengthen its tech team, while maintaining a lean structure. The sports social engagement platform plans to continue interface-based engagement with fans of other teams in different sports as well, apart from a host of various activities lined up, including merchandizing, organizing sports events and screenings in social destinations.