At the recent Virtual Reality Storytellers Guild workshop and pitch event in Bangalore, we at Crowd Product witnessed several VR talents and forward-thinking industry professionals who came together with the aim of shaping the future of VR space in India. The participants included those from backgrounds such as film-making, animation, interaction design, sound engineering, 3D gaming, human resource development, psychology and various other backgrounds. In a conversation with one of the workshop’s visiting mentors, Mark Atkin from Crossover Labs, I heard his thoughts on why Indian VR teams didn’t make it to global competitions, unlike counterparts from other global technology hubs. While he believed there was a lot of talent in the country, he felt many here didn’t tend to collaborate on projects well enough. Similar thoughts were echoed by another San Francisco-based thought-leader, currently on a project to build VR sustainable cities, who felt Indian teams weren’t diverse enough and therefore there were many perspectives they could be missing out on. While we may be tempted to probe further, but this one’s to make a beginning – to act, collaborate and build stuff. Here are some insights gained via Crowd Product during the week long VR residential program facilitated by the Nasscom Gaming Forum in Bangalore.

Which are the Industries where VR can be used in?

Tourism & Hospitality – Being an ancient and diverse country, there’s massive content that can be brought out and showcased in a visually-appealing manner by VR storytellers. Defense – With India being among the world’s largest defense importers, there’s a large market for training personnel through simulations. Construction & Real-Estate – Firms in the country could have a competitive edge by leveraging Virtual Reality for walkthroughs, marketing videos, etc. Disaster Response – Just as in defense, emergency personnel can be continuously trained and be better prepared for calamities and the relief efforts needed. (Other potential VR industries mentioned included: Education, Health & Fitness, Native advertising, Social media marketing, Adult content, Space travel, Cricket & Other sports, Automobiles, Film & Theater, Surveys & Research, International Relations, Live Shows, Celebrity engagement, etc.)

How can one make/raise money for their VR projects?

Brand integration – The burgeoning industry of In-Game Advertising (IGA) enables game-makers to seamlessly integrate advertisements into their respective games. Crowdfunding – Through campaigns via popular crowdfunding platforms, project-owners can incentivize and effectively (pre)sell products to many customers. Freemium – In this model of business, part of the product offerings is made free, while money is charged for other features and purchases (e.g. purchase of virtual goods). (Other shares on fundraising included: Venture Capital funding, Seed funding, Sponsorships, Government grants, Corporate Social Responsibility, Co-branded platform funding, PoCs with large industries, Philanthropy, etc.)

What are the formats and media through which VR projects can be spread?

Data visualization – Many organizations today have access to tons of data, these when made sense of and presented in compelling formats can attract more users. Mobile VR – Google’s daydream, Facebook’s Oculus and Samsung’s Gear VR are all in a battle to capture the future of VR, which many believe to be the smartphone space. Multiplayer VR – Latest games are increasing becoming not just immersive but also collaborative, enabling multiple players enjoy the VR experience together. (Others mentioned were: Via Television and live broadcasting, Immersive experiences, Interactive storytelling, VR sans headsets, Communicating with empathy, Non-fiction, Non-linear forms of VR, User-generated content, Movement in space cameras, Personalized for the eyes only, Visceral factors, etc.) Here are some more shares in VR hardware, its audience segments, the skills one needs for VR and its distribution. 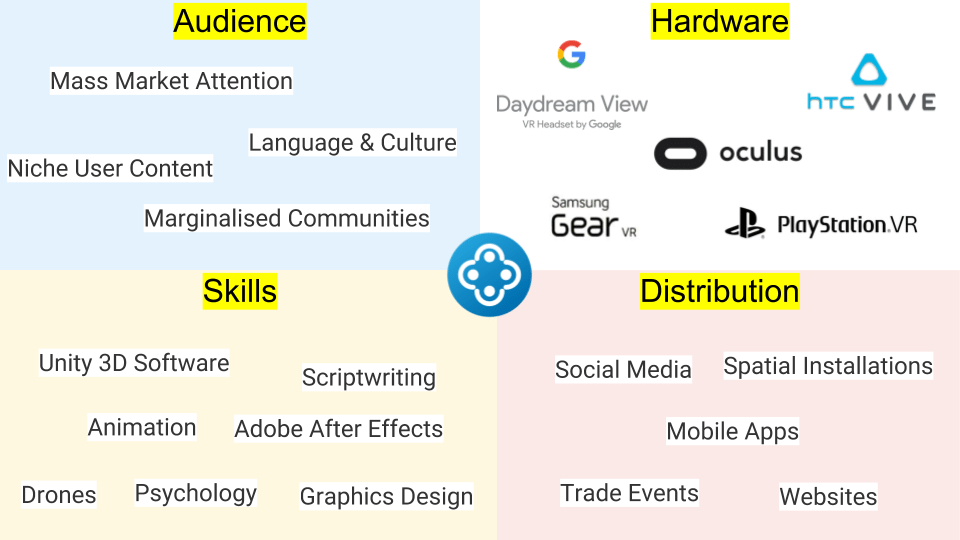 Looking at the benefits, the diverse crowd felt that Virtual Reality was a great enabler for those with disabilities, for entertainment purposes as well as with creating awareness and for various self-help initiatives.

The future of VR would be multi-sensory (involving multiple senses, besides eyesight), with mass teleportation (being at places without any physical movements required) and being part of 3-dimensional experiences. These will help business leaders and policymakers explore, learn and create better experiences for audiences.

The article has been republished with permission, and was originally published here.